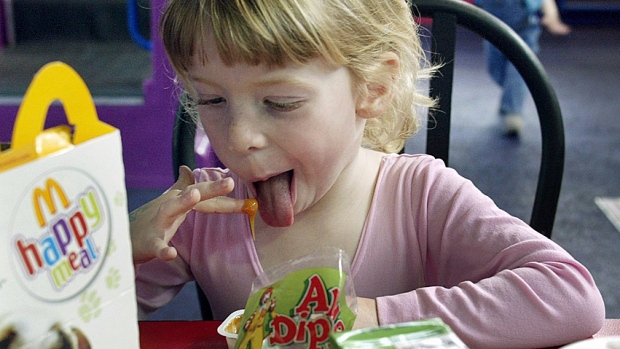 McDonald’s Canada hasn’t decided whether to follow its U.S. counterpart in removing cheeseburgers and chocolate milk from Happy Meals.

On Thursday, McDonald’s in the U.S. announced that cheeseburgers and chocolate milk will be pulled from its Happy Meal menu to help reduce calories, sodium, saturated fat and sugar that kids consume at its restaurants.

“In Canada, we haven’t made those specific decisions related to cheeseburgers and chocolate milk,” Adam Grachnik, a spokesperson for McDonald’s Canada, said in an email on Friday.

Happy Meals in Canada come with yogurt, and parents have the choice of including apple slices, Grachnik added.

In Canada, the company said it supports the global McDonald’s goals, including that by 2022, 50 per cent or more of its Happy Meals will meet the criteria of:

The cheeseburger and chocolate milk didn’t meet those new standards, the Oak Brook, Ill.-based company said. It is, however, working to cut sugar from the chocolate milk and believes it’ll be back on the Happy Meal menu eventually.

In the U.S., diners can still ask specifically for cheeseburgers or chocolate milk with the kid’s meal, but the fast-food company said that not listing them will reduce how often they’re ordered.

Other changes in the U.S. include:

Food processors and manufacturers will be required to display the labels on the front of packages, near the top. Under the proposal, the label applies when a product includes more than 15 per cent of the daily recommended intake.
With files from Associated Press.
Photo credit: Ted S. Warren/Associated Press
Original article at: http://www.cbc.ca/news/health/happy-meals-health-1.4536698