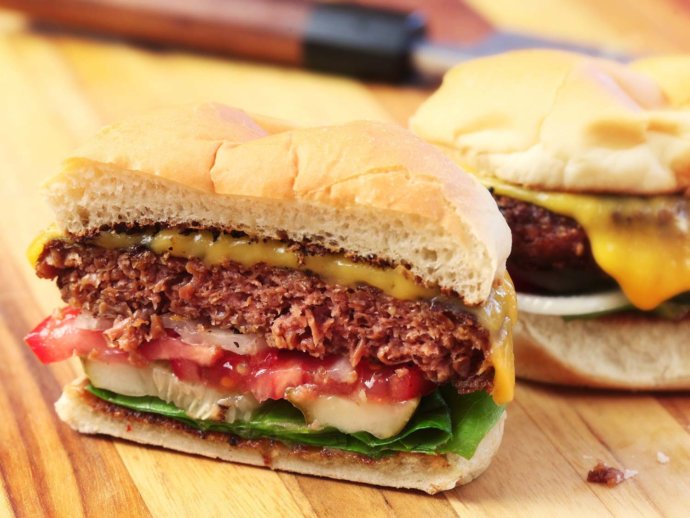 It’s a burger patty that looks, feels and tastes like meat, and when squeezed hard enough, it even appears to bleed. But there’s one key difference: it’s made entirely of edible plant matter.

Faux meat has been served in Perth’s restaurants before, but not like this. Made from a mix of pea protein, canola and coconut oils, cellulose drawn from bamboo and potato starch, it’s closer to the real thing than anything before it.

The secret to those pink juices? Beetroot juice.

Jus Burgers in Subiaco has just added the plant-based burger to its menu.

“There’s a big market of people who love the flavour and texture of meat but wouldn’t mind, every now and then, having a go at something plant-based and this fits into that category.”

A growing awareness of the environmental impacts of producing beef — livestock emit significant amounts of methane gas — and a trend towards healthy diets, is leading carnivores globally to reduce their meat consumption.

The burgers have been developed by US company, Beyond Meat.

Several Perth IGA supermarkets have recently started stocking it, while Coles added it to the shelves in NSW earlier this week.

It claims to have zero cholesterol, no gluten and no soy, while delivering slightly more protein and iron than beef.

Marketers say it has less saturated fat than beef and requires 99 per cent less water to produce, than meat.

Try the Beyond Burger as an upgrade at Jus Burgers ($3.50 extra) or in Perth at vegan fast food chain, Lord of the Fries.

“The meat flavour is quite mild, especially when it’s blended with the rest of the burger’s ingredients, but it certainly looks and feels the part, and it’s really juicy” she said.