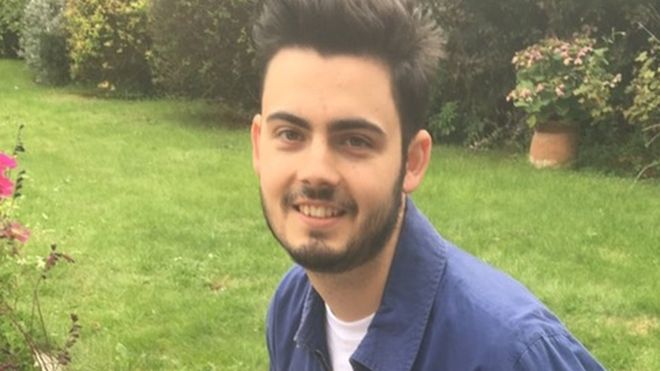 ‘I avoid kissing as my peanut allergy could kill me’

There are lots of reasons to dread moving in for that first kiss – dying isn’t normally one of them.

But for Oli Weatherall it’s a major concern along with going on flights and eating out.

The 22-year-old from Surrey has a severe peanut allergy.

When he was a child a reaction to peanut butter left him in hospital. He says his saliva thickened so much he could barely breathe.

Since then his life has changed forever and after recent high-profile cases surrounding food allergies, Oli’s been telling Radio 1 Newsbeat how he copes.

Oli describes the first time he was rushed to hospital after eating that peanut butter as his scariest experience.

He had no idea what was happening to his body as his skin broke out in hives (swollen, pale red bumps).

It’s not just a simple case of avoiding eating peanuts. Even kissing a girl on a night out could be risky.

If she’d eaten a peanut or it had even been used as an ingredient in a meal, that trace could be enough.

“People have died from it,” Oli explains.

“It’s quite a real risk, which people wouldn’t think about if you didn’t have allergies.

“Unless you know someone close to you who’s got an allergy, you don’t really need to think about areas like foreign holidays, flying, or romantic relationships.

“You quite often get people having a curry, then going to the pub and then going out, so it’s not just having physically eaten a peanut, it’s ‘have you had an Indian? Have you had a kebab?’

“I tend to avoid it really. There have been times in the past when it’s ruined my night, because I’ve spent the whole night thinking ‘Am I having a reaction?’

“I don’t need the extra stress. It would be nice to not have to worry about stuff like that but it’s a reality.”

Eating anywhere other than at home is a problem.

While restaurants should be aware of allergens and which ones are in their food, Oli says inexperienced managers or waiting staff can make life tricky.

It means every time he’s out and about for more than a few hours, he has to plan his meals precisely.

“A lot of your life has to be planned around being able to eat safely.

“It just removes spontaneity a bit. You have to be quite forward thinking all the time. Meal deals (such as at supermarkets) are always a good way to go, rather than trying to eat out.”

Foreign holidays aren’t happening at the moment either. The 22-year-old says that’s also too much of a risk.

It’s not just food on the plane. Any language barrier on holiday could create a lethal misunderstanding.

Oli says: “If I did have a reaction in the air, quite a lot of people would think ‘oh you’ve got your EpiPen, just have one of those and you’ll be fine’ but that’s not the case.”

Airlines do carry medical equipment and staff are trained in first aid. But Oli worries that’s not always enough.

“If you use an EpiPen you need urgent medical attention, that’s not something which is possible to do in the air.

“I went travelling with my friends around Australia and New Zealand three or four years ago. It was worth going, but when you’re staying in rubbish hostels with a severe allergy you can’t cook there.

“It’s not a safe environment. I ended up eating the worst diet, stuff I knew was fine for the whole trip.

“You’re on holiday, travelling and doing all these things and you’re thinking constantly ahead – ‘Am I sorted for tomorrow?’ It’s exhausting. I’m glad I did it but I wouldn’t be going to do something like that again.”

Natasha Ednan-Laperouse and Celia Marsh both died after eating Pret A Manger food.

Oli says it underlines why he would never be confident to eat at similar chains.

“There’s not the labelling there,” he says. “There’s not a uniform way of doing it – which gives people with allergies good information to make the choices.

“It’s obviously an awful story and it proves what can happen when the regulations aren’t in place.”