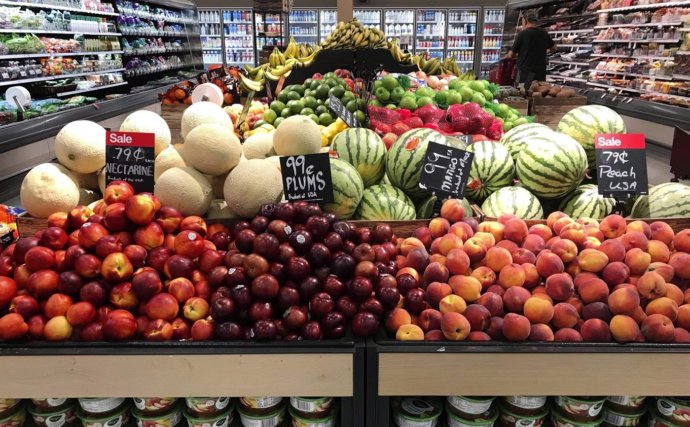 Photo by: THE CANADIAN PRESS/AP/Brynn Anderson

The world’s agriculture producers are not growing enough fruits and vegetables to feed the global population a healthy diet, according to new Canadian-led research.

The study, published this week in the scientific journal PLOS ONE, indicates that agricultural practices aren’t keeping step with prevailing dietary wisdom, greatly overproducing grains, sugars and fats while growing three times less produce than what nutritionists suggest everyone should consume.

The study, led by researchers at the University of Guelph and completed by a team of more than a dozen scientists in Canada and the United Kingdom, also stressed that a focus on growing more fruits and vegetables should go hand in hand with reduced reliance on livestock production in order to limit the agriculture sector’s overall impact on the environment.

“We just wanted to ask the question, ‘is what we’re producing globally matched with what nutritionists recommend,” said University of Guelph professor Evan Fraser, who co-authored the study led by Krishna KC, a researcher at the school. “The answer is no.”

The study contrasted United Nations agriculture production data from 2011 with the nutritional guidelines set out in the Harvard Healthy Eating Plate or HHEP model, an internationally recognized blueprint for consuming a healthy diet.

The study said the HHEP advises that 50 per cent of a person’s diet should be comprised of fruits and vegetables, with 25 per cent dedicated to whole grains and the last quarter reserved for a combination of protein, fat and dairy. The study notes that the Canadian Food Guide, updated last year, calls for 27 per cent less produce, 34 per cent less protein and 60 per cent more dairy than the HHEP model.

In order to feed everyone according to the HHEP’s guidelines, the study found global agriculture would have to produce 15 servings of fruits and vegetables per person per day. The 2011 data, however, suggested current practices were yielding just five servings.

The study also documented a smaller shortfall in protein production, with three servings per person per day produced compared to the five recommended by the HHEP.

Fraser said other food groups, however, were being grossly overproduced.

The study said agriculture should produce one serving each of oil and dairy, zero servings of sugar, and eight servings of whole grains per person per day to keep the population in compliance with the HHEP.

Instead, it found 2011 agricultural practices were yielding three servings of oil and fat, four of sugar, one of milk and a whopping 12 servings of grains per day.

Fraser said there are numerous, complex reasons for much of the overproduction, noting that people in impoverished countries often focus on growing grains because they offer a cheap, easy source of calories.

Fraser said the current crop-to-diet ratios play a direct role in levels of diabetes, obesity and other conditions strongly tied to diet, adding the shortfalls and their ensuing results would only intensify as the earth’s population continues to climb.

Nor is the solution as simple as merely growing more fruits and vegetables.

Fraser said that if the agriculture industry immediately corrected its imbalances and shifted its production priorities to align with the HHEP, a new problem would emerge.

He projected doing so would free up 51 million hectares of arable land globally, but the total amount of land used for agriculture would jump by 407 million hectares thanks in part to increased availability of pasture for livestock. Greenhouse gas emissions would also rise as a result, the study predicted.

Fraser and the team of researchers said a focus on growing more fruits and vegetables should be accompanied by reduced reliance on livestock in order to keep the global food supply sustainable.

Fraser said he “cannot imagine an agro-ecosystem without animals in it,” arguing animals play a role in cycling nutrients in the environment and preserving the quality of certain types of land.

But he said the best path forward would couple a significant increase in fruit and vegetable production with a shift away from animal protein.

“If we want to move forward to feed the future … and we want to be healthier and we don’t want to increase the amount of land that agriculture uses, we both have to shift to a Harvard Healthy Eating Plate model and we have to shift our protein consumption away from livestock-based to plant-based,” he said.