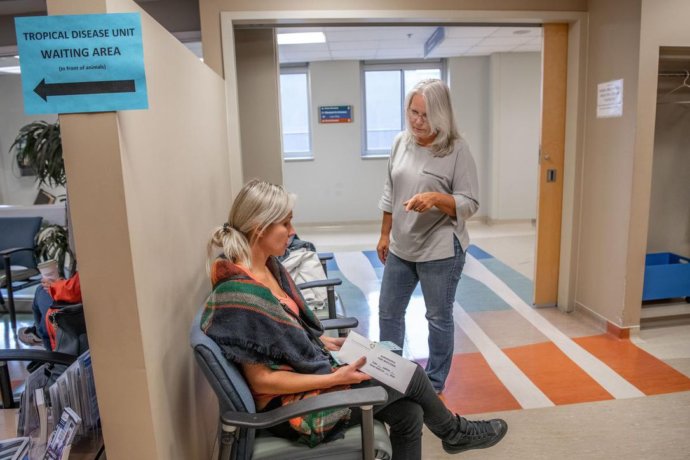 Heading for a beach vacation? Beware the hookworm

But for four friends who spent a week at the beach resort last month, those sands yielded a hidden horror: hookworms that attacked their feet and disrupted their lives for weeks.

Within days of her return home in mid-October, Tara Benedek says she developed vibrant red squiggly lines accompanied by excruciating itchiness and burning in her feet. She was left in tears and unable to sleep.

“I swear I could feel them moving,” recalls the registered nurse from Oro-Medonte near Barrie. “If there was a saw by my bed, I would have taken my feet off.”

Two weeks later she was still off work and unavailable to her family due to exhaustion from “zero sleep.”

Benedek and three others from a group of 20 friends who vacationed in Negril had become unwitting hosts to a parasite called cutaneous larva migrans or hookworm — named for its hooklike mouth parts.

Normally found in the innards of infected dogs and cats, the worms can burrow into human skin that comes in contact with sand contaminated by feces containing larvae.

“They migrate around the skin saying ‘where the hell are we?’ ”says Dr. Jay Keystone, a travel and tropical medicine specialist in Toronto. In addition to agonizing itchiness, the infection can cause swelling, blisters and insomnia from the constant torment.

A secondary infection can occasionally set in but otherwise the worms don’t cause serious problems or find their way into human intestines, says Keystone. Left alone, they eventually die but that can take months, he adds.

Ivermectin, an oral medication used to treat the infection, has only just come on the market in Canada, says Keystone, who hopes it will be widely available at pharmacies in a month or two.

He recommends avoiding contact with sand or soil by wearing water shoes on the beach — sandals are no help — and lying on a lounge chair rather than directly on the sand. There’s no preventive medication for hookworm.

The infection is “very common,” with dozens of vacationers, usually from the Caribbean, showing up at Toronto General Hospital’s Tropical Disease Unit over the fall and winter travel season, Keystone says.

That’s where Benedek and her friends ended up after their quest for treatment opened a whole other can of worms when family doctors and walk-in clinics proved incapable of properly diagnosing or treating the affliction.

“Even the physicians we dealt with were Googling it,” says Benedek.

One doctor blamed an allergic reaction to sand fleas while others prescribed a drug that was useless.

Brigitte May, another member of the group, says health-care providers at a clinic she went to responded with “oh, cool!”

May, a 55-year-old auto assembly line worker from Milton, missed a week of work because of the “very painful” condition affecting the bottoms and toes of both feet.

“It’s been the most horrifying experience, going through this physically, emotionally and mentally,” she says, realizing in hindsight that the non-contagious infection “is not a walk-in clinic thing.”

At the Tropical Disease Unit, the women were diagnosed immediately and given prescriptions for Ivermectin along with a topical medication to ease the symptoms.

The friends say they received no warnings here or in Jamaica about the health risk, and even their travel agent was unaware of it.

“I went for runs on the beach barefoot and didn’t think anything of it,” says Benedek, who celebrated her 37th birthday on her holiday.

May says dogs running loose were a common sight during her long barefoot walks every morning.

“What about kids building sandcastles on the beach?” she wonders.

But Daniela Pons, operations manager at the Grand Pineapple Beach Resort where they stayed, insists stray dogs aren’t a problem there and she’s never received any complaints about hookworm infections.

“We do everything we can to keep our beach clean,” including raking it, she told the Star.

Hamilton family physician Walter Owsianik, who bills himself as “The Travel Doctor,” calls it a “nuisance infection” that could be avoided by staying around the pool where it’s safer.

He acknowledges the affliction also has a psychological impact.

“If you tell (patients) it’s a worm, they get all freaky,” he says. “I reassure them they’re not going to die from it.”

The Association of Canadian Travel Agencies advises winter sunseekers to talk to their travel agent in advance and Google their destination to learn what diseases and health issues may pose a threat.

The 1,500-member national trade association hasn’t received any complaints about hookworm, according to spokesperson Marco Pozzobon.

Still, the infected friends say they won’t take any chances on repeating their Negril nightmare.