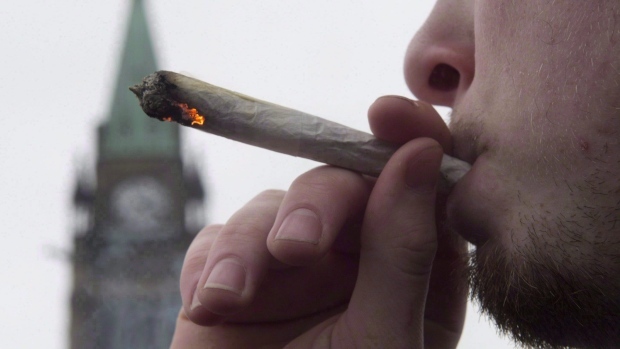 New Health Canada figures say Canadians over 25 smoked more tobacco and cannabis last year than they did two years before.

Health Canada closely tracks trends in tobacco, alcohol and drug use among Canadians 15 and older to help develop policies and programs.

The prevalence of cigarette smoking among those 25 and up was 16 per cent in 2017, an increase from 13 per cent two years earlier.

The federal survey results show little or no change in consumption habits of those in the 15-to-24-year-old age bracket, and little change in the percentage of Canadians who’d used opioids: 12 per cent, down a tick from 13 per cent in 2015.

“Problematic substance use has a very real impact on the lives of Canadians, their families and communities,” Health Canada said.

“Tobacco use is still the leading preventable cause of premature death and disease in Canada, and in 2017, approximately 4,000 Canadians lost their lives as a result of apparent opioid-related overdoses.”

The results pointing to an increase in cannabis use among those 25 and older affirm the importance of continued public-education efforts to inform Canadians about the health effects of marijuana, the department said.

The figures come just days after the federal government legalized recreational marijuana use for those aged 18 or 19 and older, depending on the province.

In 2017, the overall prevalence of smoking among Canadians aged 15 and up was 15 per cent, representing 4.6 million current smokers, an increase from 2015 when it hit an all-time low of 13 per cent.

The government aims to drive the overall smoking rate in Canada to less than five per cent by 2035.

The latest survey was conducted from February to December last year through telephone interviews with 16,349 respondents in all 10 provinces.

Other notable figures from the survey: