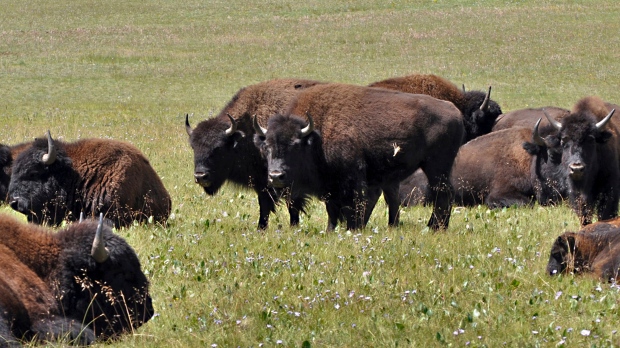 The B.C. Ministry of Agriculture has confirmed that anthrax killed 13 bison in the province.

The ministry released a statement after a diagnosis of “naturally acquired anthrax” was found as the cause of death of livestock in Fort St. John, a northern community near the border with Alberta.

The animals are thought to have contracted the disease from exposure to dormant anthrax spores in the soil of a feeding site, which is no longer being used.

Public health officials have identified individuals who might have been in contact with the source of infection and are following up with those individuals directly to assess their health.

“An effective vaccine for anthrax for livestock is available and the rest of the herd on the infected farm will be vaccinated,” the ministry said.

“Animals that have been exposed to anthrax spores in soil are often successfully treated if diagnosed early.”

No further losses on the farm, which has a herd of more than 150 animals, have been reported.

And there is no risk to the general public.

Anthrax occurs naturally in livestock on the Canadian Prairies and in Northern Alberta, and is established in Alberta’s Wood Buffalo National Park.

The bacteria can remain dormant in soil under certain conditions for many years.

Though anthrax can affect humans, infection is very rare and there have been no indications of anyone in contact with the animals being infected.

People handling infected animals or contaminated products may contact anthrax spores through cuts or scrapes on their skin, resulting in sores and infection that can be treated with antibiotics.

The anthrax found in soil poses a greatly reduced risk compared to anthrax spores that disperse in air where they can be inhaled, the ministry said.

These so-called weaponized versions of anthrax can lead to severe lung infections.

The most recent cases of human anthrax were in Saskatchewan in 2006 and involved people with skin infections, all of whom recovered fully.

Farmers seeking advice on the prevention, diagnosis and treatment of anthrax cases in their herd are encouraged to contact their veterinarian.