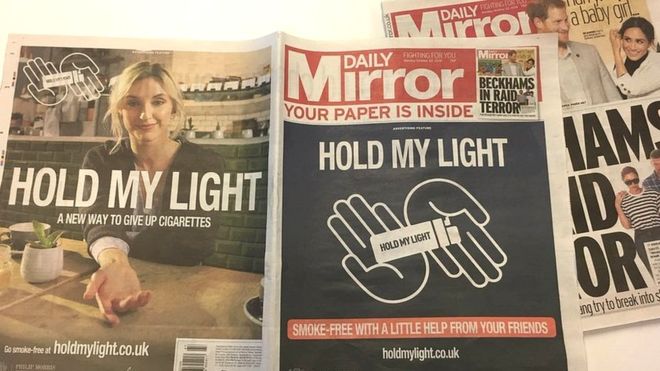 One of the world’s biggest tobacco firms, Philip Morris, has been accused of “staggering hypocrisy” over its new ad campaign that urges smokers to quit.

The Marlboro maker said the move was “an important next step” in its aim to “ultimately stop selling cigarettes”.

But Cancer Research UK said the firm was just trying to promote its smoking alternatives, such as heated tobacco.

“This is a staggering hypocrisy,” it said, pointing out the firm still promotes smoking outside the UK.

The charity said smoking was the leading preventable cause of cancer and it encouraged people to switch away completely from smoking, including through the use of e-cigarettes.

Health charity Action on Smoking and Health (Ash) also criticised the campaign – which is called Hold My Light and has been launched in a four-page wraparound on Monday’s Daily Mirror – saying it was a way for Philip Morris to get around the UK’s anti-tobacco advertising rules.

There is also a campaign video, which shows a young woman negotiating a Mission Impossible-style room in order to hand her cigarette lighter over to a group of friends, who are supporting her in a bid to give up smoking.

Most forms of tobacco advertising and promotion in the UK are banned, and rules introduced last year mean cigarettes and tobacco must be sold in plain green packets.

Deborah Arnott, chief executive of Ash, said Philip Morris was still advertising its Marlboro brand wherever globally it was legal to do so.

“The fact of the matter is that it can no longer do that in the UK, we’re a dark market where all advertising, promotion and sponsorship is banned, and cigarettes are in plain packs.

“So instead Philip Morris is promoting the company name which is inextricably linked with Marlboro,” she said.

Philip Morris has said previously that it wants to achieve a “smoke-free” future.

Like many tobacco firms, Philip Morris is moving towards a focus on new products to replace cigarettes as the number of smokers in the UK continues to decline.

In the UK, it markets several alternatives to cigarettes, including a heated tobacco product, Iqos.

It also owns the Nicocig, Vivid and Mesh e-cigarette brands.

Asked why, if Philip Morris was so keen for smokers to quit, it did not simply stop making cigarettes and focus entirely on alternative products, he said it was because smokers would just switch to a rival product.

“Cigarettes still generate 87% of our business. We want to get to [smoke-free] as soon as possible, and we want to be selling alternatives, but it does take time,” he said.

Mr Nixon said the firm had invested over £4bn in developing alternative products to cigarettes.

In an unusual move, the Daily Mirror made a reference in its editorial column to the advertising feature which envelops the paper. It said it was “pleased to back the campaign”.

It added: “Yes, we were surprised too that this is a campaign created by Philip Morris Ltd. But it can only be a good thing that they are now trying to encourage people to quit cigarettes.”

In July last year, the government set out a plan to make England, in effect, smoke-free in the next few decades.