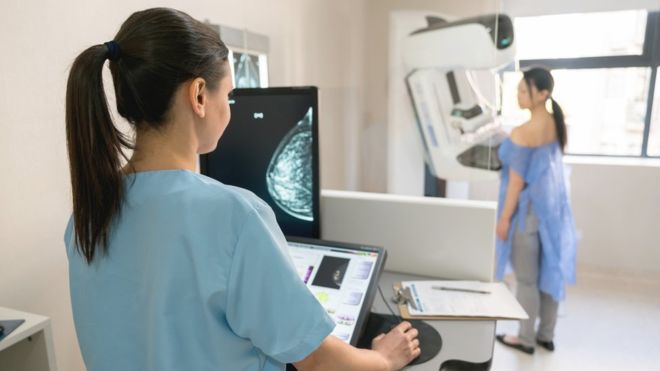 Combining a pioneering drug with hormone therapy may extend the survival of some women with advanced breast cancer, a trial suggests.

Women who received palbociclib and hormone therapy lived up to 10 months longer than those given hormone treatment alone.

It also delayed the time at which women needed to begin chemotherapy, which often has debilitating side-effects.

Experts say the preliminary results of the trial are very encouraging.

But they point out that the treatment is not a cure and will not work for everyone.

The placebo-controlled clinical trial tested the benefit of adding palbociclib to the hormone therapy fulvestrant in a trial of 521 women with advanced, oestrogen-receptor positive breast cancer whose tumours did not have the HER2 gene.

Oestrogen-receptor positive breast cancers are the most common form of breast cancer, accounting for about 70% of cases.

The study, led by researchers from the Institute of Cancer Research, in London, and the Royal Marsden NHS Foundation Trust, examined what effect palbociclib had on women’s overall survival and whether it could delay the need for chemotherapy.

The analysis found that in women whose tumours had previously responded well to hormone therapy (410 of the 521 women), the treatment extended survival by 10 months to an average of 39.7 months, compared with 29.7 months in the women who received fulvestrant and a dummy pill (placebo).

However, the treatment did not extend survival in those who had previously not responded well to hormone therapy.

The group of women given the combination treatment also had a nine-month longer delay until the start of chemotherapy.

Prof Nicholas Turner, who led the study, said: “The development of palbociclib is one of the biggest advances in treatment for women with advanced breast cancer in the last two decades.

“This drug can offer women more precious time with their loved ones, and because it is a targeted treatment it is much kinder than chemotherapy, and enables many women to carry on with their lives normally.”

Palbociclib was approved for use in England by NICE in November 2017, but currently is only available for women with oestrogen receptor-positive breast cancer who were diagnosed after the disease had begun to spread.

The authors of this new study want it to also be made available to women whose breast cancer has previously been treated with hormone therapy.

“Although the treatment gave some people with breast cancer precious extra months, it’s not a cure, and won’t work for everyone.

“So we need to understand more about breast cancer’s weak spots and exploit them to develop even more effective treatments in the future.”

Lady Morgan said it was important for NICE to reform its method of appraising combination therapies so that breast cancer patients could benefit from the palbociclib and fulvestrant treatment.

The study has been published in the New England Journal of Medicine and was presented at the European Society of Medical Oncology congress in Munich, Germany.