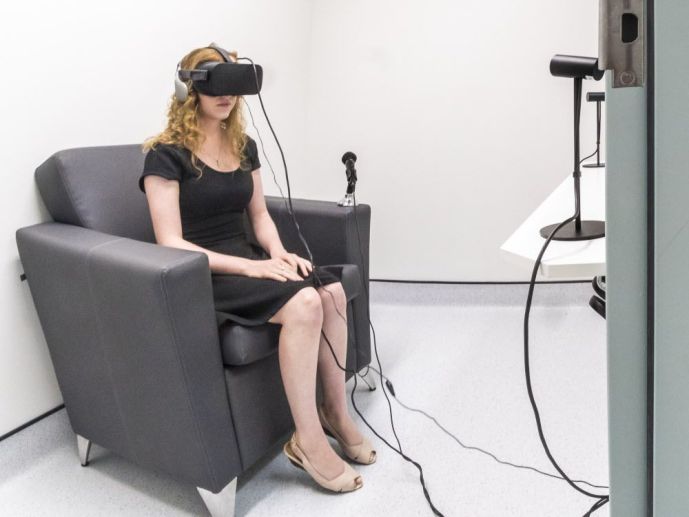 People with schizophrenia learn to fight their demons with virtual reality

They popped up out of nowhere, telling Richard Breton how he was nothing, nothing but a bad father, a nasty husband, and had no friends because he was disgusting.

For 30 years the debilitating voices and hallucinations came 15 times a day. His head reverberated with voices shouting the worst scenarios: “The car driving down the road is going to swerve on the sidewalk and smash into you. A bomb will explode, or someone armed with a gun is going to shoot everyone,” he recalled.

Breton, 53, said he’d have done anything to make the demon voices leave him alone. Anything, that is, except increase the anti-psychotic medication prescribed for schizophrenia because the side effects were insufferable. He couldn’t work. It robbed him of energy, motivation and libido. He could barely manage to eat and wash himself, and he trembled, spending the better part of each day in a zombie-like, drug-induced daze.

But today that period of Breton’s life is long over. Breton has returned to school and has been working for two years, and he’s remarried. Also, his doctors reduced the antipsychotic medication to a minimum. Breton says his turnaround is not due to any wonder drug but to a new treatment that fights hallucinations with hallucinations.

Breton was among a handful of patients in a pilot study using virtual reality led by psychiatrist Alexandre Dumais at the research centre of the Institut universitaire en santé mentale de Montréal and the Institut Philippe-Pinel de Montréal.

Based on the success of that pilot study, the Canadian Institutes of Health Research awarded Dumais a grant of $650,000 in July to run Phase 3, six-year study that will compare the virtual reality method with a talking therapy called cognitive behavioural therapy (CBT), which attempts to train the brain to think differently.

Dumais’s team created an avatar that looked and sounded like the demon in Breton’s head.

When he slipped on the virtual reality goggles, Breton saw his persecutor coming towards him, spewing the same vile words. “I cried at hearing those words,” Breton said. “The voice was exactly the same. I knew it was Dr. Dumais behind the avatar. But it didn’t matter.”

The first session was really rough, Breton said. It lasted only four minutes but “felt like 30 minutes.”

Dumais told Breton to try the techniques he always uses to get rid of his voices.

“I started to scream but the avatar didn’t go away,” he recalled. “My anxiety exploded … it was really stressful. I’ve been hearing those voices for 30 years.”

By the fourth therapy session, Breton stopped being a victim. He told his avatar that he was lying, that according to friends and family, “I am generous and kind, a good person who likes to help people. I don’t want to listen to you.”

In the next few sessions Breton chased his demon, telling him to get lost, that his words were all lies.

Breton said he didn’t believe the therapy would work when Dumais approached him. Yet now more than 80 per cent of the hallucinations have disappeared, thanks to Dumais’s method, Breton said. “It completely changed my life,” he said. “I went back to school and back to work. I am also on many (patient and health) committees.”

It’s well known that drugs used to treat schizophrenia, a chronic and severe mental illness, are far from ideal, Dumais told the Montreal Gazette. Many patients don’t respond well to the drugs and continue to suffer from debilitating hallucinations that persecute them. Avatar therapy was invented by a British professor, Julian Leff, to help patients who despite drug therapy still heard and saw hallucinations. Leff brought his patients’ voices to life with two-dimensional computer images, Dumais explained.

Dumais improved on the concept by turing to virtual reality. “We saw a huge improvement in people who suffered badly and for a long time,” Dumais said. Published in the journal of Schizophrenia Research, the pilot study “produced significant improvements” in patients in whom every other treatment had failed, and who are at risk for self-harm including suicide.

The implications for schizophrenia patients’ health and quality of life “are potentially enormous,” researchers wrote. As the voices diminished, their distress abated.

Schizophrenia generally affects up to one per cent of the population.