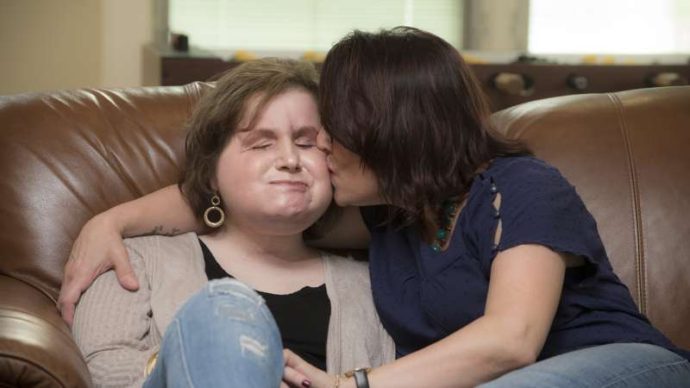 A Canadian doctor was among a world-class team responsible for giving a young woman in her 20s a new face and, by extension, a second chance at life.

The remarkable story of Katie Stubblefield, who nearly died by suicide at 18 when she shot herself in the face, was profiled on the front-page of the latest issue of the magazine.

Stubblefield tried to kill herself with her brother’s gun after a breakup in 2014. Her parents rushed her to hospital where she was kept alive. The bullet missed her brain, but she lost her vision and speech. Her face was unrecognizable.

The medical team at Cleveland Clinic, a renowned American hospital based in Ohio, was determined to give Stubblefield the best recovery possible. They set out to perform a face transplant — a complicated procedure that’s only been performed on a few dozen patients worldwide.

Ahead of Stubblefield’s surgery, Dr. Doumit said more than 20 cadaver dissections were done to “perfect and optimize the results for Katie.”

“By the time you come to the surgery, you are basically executing what you practiced,” Dr. Doumit told CTV News.

The team performed a series of more than 20 operations over four years ahead of the transplant. Surgeons repaired Stubblefield’s jaw, lips and skull in preparation for the full face transplant.

Stubblefield waited years for the right donor. In 2017, she had a match – a 31-year-old woman who died from a drug overdose.

Ahead of the final transplant, Stubblefield said in an interview: “I’m just really thankful for this opportunity, at a second chance at life.”

“But you have such an adrenaline rush that you almost want to continue operating,” Dr. Doumit said.

One of the toughest parts of performing a face transplant is creating a seamless match, Dr. Doumit said.

“When you do a face transplant, you’re trying to match a dead person’s face on another person. And there are no two people alike, so the bone height is not the same,” he said.

“Even if you practice on cadavers, obviously the person that you are getting right now might not be an exact match, so you still have to match those two people to fit as a puzzle.”

Aside from the appearance, Dr. Doumit said a successful face transplant is also about restoring proper function, such as breathing, chewing and facial expressions.

Stubblefield’s successful surgery made her the 40th person ever to receive a face transplant. She is the youngest American to undergo the procedure, which is still considered experimental.

It’s the second time Dr. Doumit has worked on a face transplant. He considers performing the marathon operation a “privilege.”

“Of all the surgeries that we do as a surgeon, this is the most gratifying, because you’re giving a person a new start on life,” he said.

Now, one year after her successful surgery, Stubblefield, 22, is on the road to recovery. She has learned how to read braille and plans to pursue a career in counselling.

Most importantly, her doctor says, her sense of self-worth has significantly improved.

By speaking out, Stubblefield hopes to share her story with young people struggling with suicide. She hopes her experience can demonstrate the value of life.

“So many people have helped me; now I want to help other people,” she told National Geographic.

Crisis centres for those considering suicide are available around the clock in communities across Canada. Click here for a full list of resources.
Photo: Cleveland Clinic
Source: https://www.ctvnews.ca/health/canadian-surgeon-helps-with-face-transplant-for-young-suicide-survivor-1.4054772