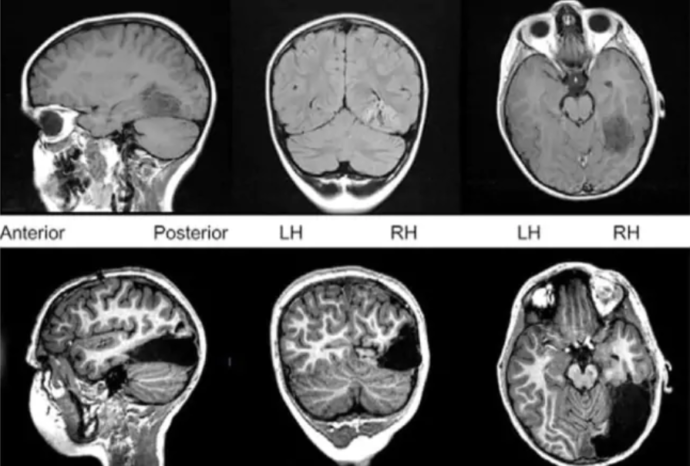 The brain reorganizing itself after a lobectomy

When UD was just four years old, doctors found a golf-ball-size tumour in his brain. By the age of six, he was suffering from more than 30 seizures a day. After several failed treatments, the boy’s seizures were getting worse, so doctors turned to their last resort: removing a major piece of the brain.

“It was determined that the seizures were arising from the tumour itself and also the tissue surrounding the tumour, which was the temporal and occipital lobe,” said Dr. Taylor Abel, surgical director of the Epilepsy Surgery Program at University of Pittsburgh Medical Center’s Children’s Hospital, where the surgery was performed.

He says the amount removed was significant — “maybe the size of a baseball” — and they were the areas of the brain that deal with processing visual cues for faces and, to a lesser extent, words.

But now, years later, the boy — identified by scientists only as UD — is fine. And the case study is now changing what we know about how the brain can fix itself.

Stress test for the brain

The surgery is used to treat epilepsy, and this hospital does about 12 of them a year. What was different in this case was what happened afterward.

Extensive monitoring, unlike ever before, by a team led by Carnegie Mellon University’s Dr. Marlene Behrmann, professor of cognitive neuroscience, included brain scans and complex tests to look for even the smallest deficiencies in UD’s processing power.

“We conducted a sort of a stress test for the visual system in order to determine whether there were any subtle alterations in his behaviour or performance. We found none,” she told Quirks & Quarks guest host Britt Wray.

“Perhaps the most dramatic and intriguing finding was that the important function of the right hemisphere visual system appeared to be transferred over to the intact left hemisphere.”

Left brain picking up the slack

Typically, the right hemisphere of the brain specializes in facial recognition, but the part that is responsible for that function was removed from UD’s brain.

When that surgery is performed on adults, they develop what is known as face blindness — the inability to recognize someone’s face. But in UD’s case, he was young enough that his brain was still developing that skill, so it just re-assigned the task to a different part of the brain instead.

UD’s vision is fine. The only after-effect of the surgery is that he can’t process information from his left field of vision, and has a blind spot to the left of his nose. His parents say he can still ride a bike, but he won’t be able to drive a car. Since he has remained seizure-free since the surgery, they don’t seem to mind.

“They are extremely pleased with the outcome. I mean, UD is a perky, curious, bright, interesting 12-year-old. He’s made great progress. He wants to be a scientist,” said Behrmann.

Her hope is that the surgery might not be considered a “last resort” anymore but rather a viable option if it’s done soon after diagnosis, as the brain is still developing. She is continuing her work with more than a dozen other patients who have received the surgery, to figure out how to pinpoint exactly what this window of opportunity is, and learn what makes a brain capable of such adaptation in the first place.

“I’m hoping that this is just the first step in opening a kind of scientific understanding of plasticity, understanding its replicability, and understanding who and who are not great candidates for reorganization.”
Photo credit: Carnegie Mellon University
Source: https://www.cbc.ca/radio/quirks/august-4-2018-parker-solar-probe-watching-a-brain-rewire-itself-gut-microbes-thwart-weight-loss-and-more-1.4771602/scientists-get-a-rare-glimpse-of-the-brain-reorganizing-itself-after-a-lobectomy-1.4771624