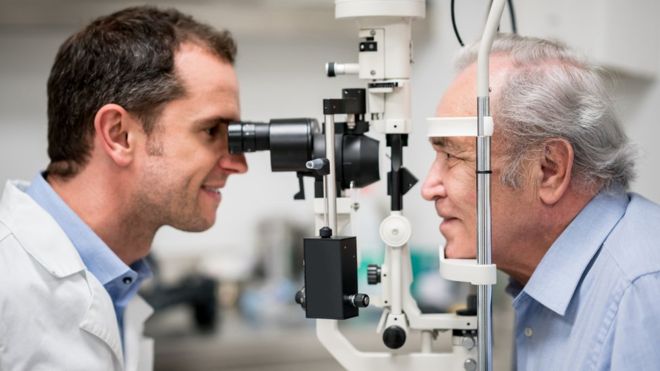 A simple eye test carried out by opticians could help predict who is at risk of developing dementia, a study suggests.

The test is usually done to spot early signs of eye disease, by looking at tissue at the back of the eye – the retina.

Now scientists have found people with thinner retinas are more likely to have problems with memory and reasoning.

Researchers believe the test could be used to screen for early dementia.

The study of 32,000 people measured parts of the retina, and in particular the retinal nerve fibre layer (RNFL), using optical coherence tomography (OCT).

Study participants, who were between the ages of 40 and 69, were also assessed on their memory, reaction time and reasoning.

Scientists found those with the thinnest RNFLs were more likely to fail one or more of the tests.

They were also twice as likely to score worse in follow-up assessments over the next three years, the study published in JAMA Neurology found.

Memory loss, difficulty with carrying out familiar tasks and other types of cognitive decline can be early symptoms of dementia.

Prof Paul Foster, from the University College London Institute of Ophthalmology, co-lead author of the paper, said OCT tests could help identify people at high risk of developing the disease.

Prof Foster added: “It is likely that treatments will be more effective in slowing or stopping dementia at earlier stages of the disease.

“Also, by targeting people in the earlier stages, it should be possible to design better clinical trials for treatments that make a real difference and improve people’s lives.”

An association between deterioration in the retina and optic nerves, and people who have established dementia had already been known.

But researchers said their study suggested such changes could be spotted with OCT tests even in the early stages of cognitive decline.

Experts say deterioration in the retina may mirror changes going on in the blood vessels in the brain, which could play a role in the development of the disease.

However, other scientists have questioned the link between RNFL thickness and dementia, arguing that it does not reliably predict cognitive ability.

Researchers said an advantage of OCT tests is that they offer a relatively inexpensive and non-invasive way to screen for dementia.

But they said the tests should probably not be done in isolation to screen for dementia, as there would be people with thinner retinas who did not go on to experience cognitive decline.

Dr Laura Phipps, from Alzheimer’s Research UK, said exploring how the eye can be used as a window into early brain changes was a growing area of research.

She said it would be interesting to see whether further studies showed that a greater likelihood of cognitive decline in those with thinner retinas also translated into an increased risk of dementia.

“With future treatments for Alzheimer’s and other dementias likely to be most effective when given early in the disease process, research into sensitive and non-invasive early markers of disease is vital.

“The brain is well protected by the skull and current approaches for detecting brain changes – such as brain scans – can be expensive to use routinely.

“While a diagnosis of dementia will always rely on results from a number of different tests, further studies should look at how sensitive OCT could be at identifying those most at risk of cognitive decline in the general population.”

The charity added that it was co-funding a study which analysed eye scans to look for features that could indicate the presence of dementia.
Photo credit: Getty Images.
Source: https://www.bbc.com/news/health-44936752