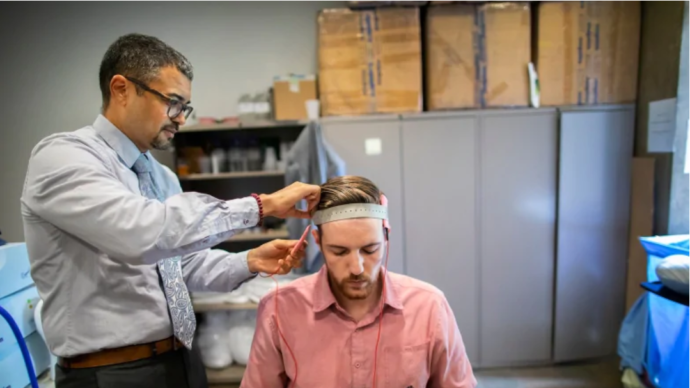 Studies have shown that people with anti-social, violent tendencies tend to have weaker pre-frontal cortexes. And now new research is suggesting that by sending a tiny jolt of electricity to that part of the brain, we can strengthen the pre-frontal cortex and reduce violent thoughts.

“It’s not electroshock therapy. It’s a non-invasive technique with a very weak electric current,” says Prof. Olivia Choy, one of the authors of the study.

She used a method called transcranial direct current stimulation, also called tDCS, which is commonly used to treat ADHD, depression, stroke and to even boost memory, in an experiment to reduce violent thoughts.

Choy recruited 86 volunteers, who were randomly assigned to either receive low-current stimulation for a few seconds or a more intense 20-minute stimulation to the prefrontal cortex.

Then, scientists asked everybody to read two hypothetical scenarios, one involving a physical assault and another involving a sexual assault. Immediately afterwards, the participants were asked to rate the likelihood that they would act as the protagonist had in the scenarios.

For those who had their brains zapped for 20 minutes, their likelihood of relating to the protagonist was 54 per cent lower than those who did not receive brain stimulation. Choy thinks that the zap triggers a stronger moral response in the volunteers.

“It seems that the difference can be accounted for by an enhanced perception of how morally wrongful those acts are. So people perceived those acts as morally wrong after they received stimulation to the frontal part of the brain. And that in turn led to the reduction in behavioural intentions to commit those aggressive acts.”

For Choy, this is a great first step to showing the potential of this technique. “It’s an early step, but here, we’re changing intentions, which is really a first step to changing behaviour.”

“We do know that social factors and psychological factors certainly play a role in antisocial and aggressive behaviour. But I think what we’re missing is another piece of the puzzle. So if we can target biological factors as well, it may be that a tool like tDCS, in conjunction with other therapies, might lead us to see better results in terms of reducing levels of antisocial and aggressive behaviour.”
Photo credit: Eric Sucar/University of Pennsylvania
Source: https://www.cbc.ca/radio/quirks/july-7-2018-curbing-violent-thoughts-and-arctic-archaeological-treasures-at-risk-1.4734718/a-tiny-zap-of-electricity-to-the-brain-could-reduce-violent-intentions-study-suggests-1.4734734