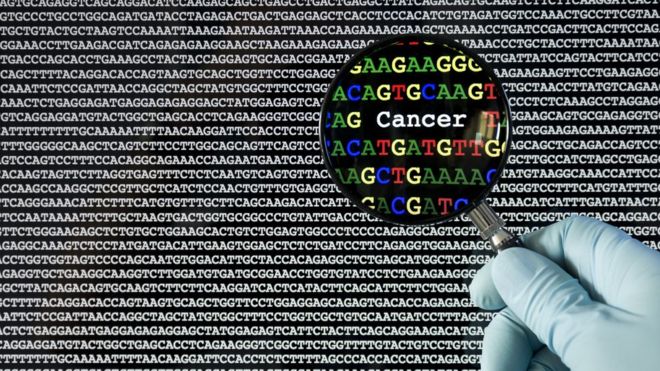 Scientists in Cambridge say advances in genetics are set to transform the treatment of breast cancer, making it more personalised to each patient.

All women there diagnosed with breast cancer have their entire genetic code mapped.

Doctors say it is helping them chose the right treatment and predict whether patients are likely to experience side effects.

It can also reveal whether their cancer is becoming resistant to treatment.

Carlos Caldas, Prof of Cancer Medicine and programme director at Cancer Research UK Cambridge Institute, said: “By sequencing the tumour we have something like a barcode which gives us the pattern of mutations in that cancer.

“We can understand how the body, and in particular the immune cells are responding and this enables us to deliver more precision medicine.

“This barcode also enables us to do surveillance and identify early whether a tumour is coming back because it is developing resistance to treatment – when those cells start releasing their DNA we can detect them in a blood test known as a liquid biopsy.”

To date, 275 women have joined the Personalised Breast Cancer Programme in Cambridge, which was launched in 2016 with just over £1m funding from Addenbrooke’s Charitable Trust.

They aim to enrol 2,000 patients in the next four years.

Prof Caldas said: “Breast cancer is not one but 10 or 11 diseases that are distinct molecular entities and we will increasingly see patients being categorised into one of these groups, enabling us to tailor the way we monitor them; it’s a dramatic improvement in the way we personalise their treatment.”

Dr Jean Abraham, consultant oncologist at Addenbrooke’s hospital, said: “We have had lots of cases where we either opted for a patient to go on a clinical trial because of the results of their sequencing or were offered an alternative treatment as that was a better option.”

Elizabeth Banns, 61, joined the study after she was diagnosed with inflammatory breast cancer last year.

Like other patients, she had surgery, chemotherapy and radiotherapy.

Despite this extensive treatment, her cancer returned and is now incurable, but Elizabeth remains optimistic: “Being part of research gives you are feeling of control and being part of something.”

She told me: “It’s reassuring knowing that I don’t have to keep going back for biopsies because they have my genetic code and that of my cancer; it’s banked and hopefully it will mean that first one targeted drug trial and then another will come along that I will be eligible for.”

Within an hour of their biopsy, samples from their tumour is injected under the skin of laboratory mice.

These cancer avatars are used to model the effects of different treatments.

I was shown two sets of mice, all carrying the same tumour.

The patient had not responded to chemotherapy, and nor did the mouse avatars that were given the same drug – the tumours could be seen growing under their skin.

The second group were given a different drug from the patient and their tumours had not grown.

The hope is, for some patients, it will identify the most promising drugs and eliminate others which are unlikely to work.

Dr Alejandra Bruna, molecular biologist, Cancer Research UK Cambridge Institute told me: “We want to reduce the number of toxic drugs that we give to patients, and where possible treat them with targeted therapies with fewer side effects.”

The patients’ tumours are also grown in cells lines, enabling the majority of drug testing to be done in laboratory dishes, so minimising the number of animal tests.

The project is still at the research stage and not directly influencing clinical decisions.
Source: https://www.bbc.com/news/health-44455354