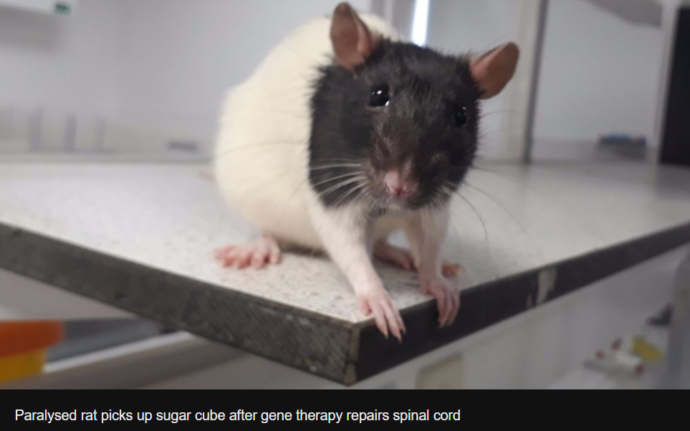 Scientists say they have taken a significant step towards the goal of giving paralysed people control of their hands again.

The team at King’s College London used gene therapy to repair damage in the spinal cord of rats.

The animals could then pick up and eat sugar cubes with their front paws.

It is early stage research, but experts said it was some of the most compelling evidence that people’s hand function could one day be restored.

The spinal cord is a dense tube of nerves carrying instructions from the brain to the rest of the body.

The body repairs a wounded spinal cord with scar tissue.

However, the scar acts like a barrier to new connections forming between nerves.

How the gene therapy works
The researchers were trying to dissolve components of the scar tissue in the rats’ spinal cord.

They needed to give cells in the cord a new set of genetic instructions – a gene – for breaking down the scar.

The instructions they gave were for an enzyme called chondroitinase. And they used a virus to deliver them.

Finally, a drug was used to activate the instructions.

The animals regained use of their front paws after the gene therapy had been switched on for two months.

Dr Emily Burnside, one of the researchers, said: “The rats were able to accurately reach and grasp sugar pellets.

“We also found a dramatic increase in activity in the spinal cord of the rats, suggesting that new connections had been made in the networks of nerve cells.”

The researchers hope their approach will work for people injured in car crashes or falls.

Prof Elizabeth Bradbury told the BBC: “We find this really exciting, recovery of this type of function, because for spinal injured patients their highest priority is to get their hand function back.

“Being able to pick up a coffee cup, hold a toothbrush, these types of things will have a dramatic increase on their quality of life and their independence.”

In 2014, a paralysed man was able to walk with a frame after cells from inside his nose were used to regenerate part of his spinal cord.

The patient, Darek Fidyka, was injured in a knife attack that caused a different type of wound to those in car crashes.

The gene therapy approach is not yet ready for human clinical trials.

Dr Mark Bacon, from the charity Spinal Research, told the BBC: “The data is some of the most compelling I’ve seen demonstrating restoration of skilled forelimb function.

“It’s exciting, but getting approval for gene therapies represents a particular, but not insurmountable, challenge to getting it to the clinic.

“Transferred to the clinic, this research could be life-changing for the millions of people worldwide with paralysis caused by a spinal cord injury.”
Original article at: https://www.bbc.com/news/health-44484901 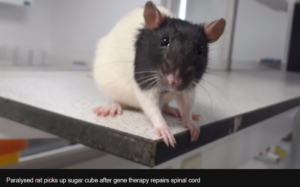