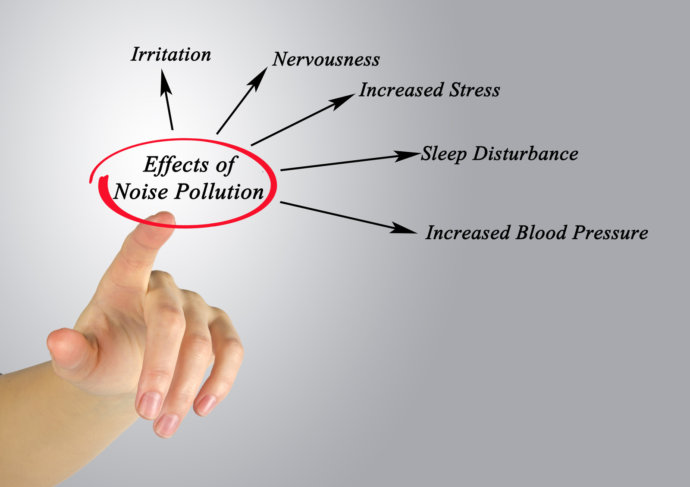 How loud noises can affect your heart

We know that high blood pressure, elevated cholesterol and smoking aren’t good for the heart. Well, it turns out loud noise is another risk factor your doctor may not want to keep quiet about.

That noisy little headline comes from researchers at the Massachusetts General Hospital. They studied 499 people with an average age of 56.

At the beginning of the study period, all of them were free of cardiovascular disease. Over time, they tracked how many of the test subjects got heart attacks and strokes. The researchers used the home addresses of study participants to estimate the level of ambient noise where they resided.

Compared to people who lived with lower levels of noise, those with the highest levels of chronic noise exposure were three times more likely to have a heart attack, a stroke or other major cardiovascular event.

The results were presented at a scientific meeting of the American Heart Association held earlier this month in Chicago.

The study’s authors said typical sources of heavy chronic noise exposure include close proximity to a highway, a major airport or a busy traffic zone.

Commercial aircraft on takeoff produce noise levels above 120 decibels. A telephone ring produces about 80 decibels and a jackhammer about 100. Highway traffic noise ranges from 70 to 80 decibels at a distance of 15 metres from the highway.

NoiseQuest, sponsored by the U.S. Federal Aviation Administration’s Office of Environment and Energy to improve public understanding of aviation noise, provides a forum for noise issues and has a wealth of information on common sources of noise.

We tend to think it’s exposure to really loud and startling sounds that have the biggest impact on health. However, experts say chronic exposure to anything over 60 decibels can affect the heart. That level of noise corresponds to a loud conversation in an office.

But how does chronic noise exposure increase the risk of heart damage? This is where the study gets really interesting.

The researchers did PET and CT scans of research subjects. In the brain, they were looking at the activity of a tiny, almond-shaped structure called the amygdala. It’s an area of the brain involved in emotional responses and, in particular, regulating our response to stress.

Inflammation in the arteries

The researchers found that people with the highest levels of noise exposure had higher levels of brain activity inside the amygdala.

The test subjects with higher activity inside the amygdala also had greater amounts of inflammation in their arteries inside the heart and the brain. Doctors know from other studies that inflammation of the arteries is necessary for the development of heart disease and strokes.

In the current study, the researchers found that high levels of activity inside the amygdala actually increased the level of inflammation inside the coronary arteries.

Air pollution, smoking and diabetes are other known factors that cause inflammation of the arteries.

In this study, when the researchers took those factors into account, noise still turned out to be a major contributor to inflammation and therefore to the risk of heart attacks and strokes.

As a physician, I find the implications of these findings to be staggering.

Rising rates of noise are happening everywhere. Anyone who lives in a city anywhere on the planet should be concerned about the health impact of exposure to excessive noise.

Until now, we’ve chalked up rising levels of noise from busy highways, traffic zones and airports to progress and prosperity. Now, we see that there’s a hidden danger to our health.

And it’s something your body won’t let you escape. You may be able to tune the noise out of your conscious mind, but your brain and your heart do not develop tolerance to noise. If anything, your arteries may become even more prone over time to damage caused by noise.

Keep in mind that chronic exposure to a lower level of noise can affect your heart.

Across the planet, rates of cardiovascular disease continue to rise. If noise is a significant factor, then addressing the problem should save lives and health-care dollars.

Those will only take us so far. We need engineers to figure out how to make highways, traffic zones and airports quieter. There must be building materials that absorb sound instead of reflecting it. We need to find ways of shielding neighbourhoods and office buildings from sounds that disturb our health.

I think we also need to identify people who are especially vulnerable to heart disease caused by noise. Perhaps the government should provide subsidies to make their homes more soundproof or to help them relocate to less noisy areas.

Earplugs can help some people block out the noise. There may be value in teaching relaxation therapy and meditation to help deal with the stress caused by excess noise.

This is a challenge that will require efforts by patients, doctors, researchers, engineers and legislators.

The risk is too great to ignore.