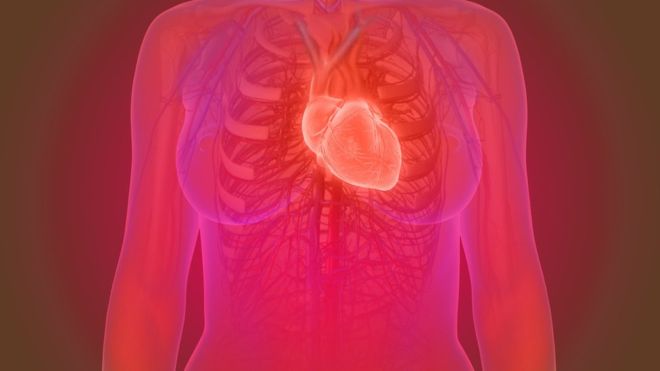 Women who smoke, have diabetes or high blood pressure increase their risk of a heart attack more than men faced with the same risks, a large study of UK adults has found.

The researchers, writing in the BMJ, said women should receive the same treatments as men and be offered support to stop smoking.

Doctors should also be better at spotting female patients at risk.

Men are still three times more likely than women to have a heart attack.

Over seven years, 5,081 people had their first heart attack and one in three of them were women.

Although the risk of having a heart attack is lower in women than in men of all ages, certain risk factors appeared to have a greater impact on women.

Women who smoked were three times more likely to have a heart attack than women who did not smoke – but in men, smoking only doubled their risk.

High blood pressure increased a woman’s risk by an extra 83% relative to its effect in a man.

Type 1 and type 2 diabetes both had a greater impact on the heart attack risk of women compared to men, the study found.

The researchers say they do not know why these factors are sex-specific, and no firm conclusions can be drawn about cause and effect, but they do have some theories.

Biological factors may be a reason. For example, type 2 diabetes, which is usually linked to poor diet and lifestyle factors, may have a different impact on the female heart to the male one.

But the study says women often don’t realise they are at risk of heart disease and they may also be on the receiving end of poorer care and treatment from doctors.

In an accompanying editorial, the researchers say men may be more prone to heart attacks, but heart disease is the biggest killer of women in the UK.

Although the chest pain is often severe, some people may feel only minor pain, similar to indigestion. In some cases, there may not be any chest pain at all, especially in women, the elderly and people with diabetes.

Dr Elizabeth Millett, lead study author and an epidemiologist at the George Institute for Global Health, University of Oxford, said: “Heart disease also affects women and this needs to be recognised.

“Women need to be aware they’re at risk, but despite lots of campaigns, it’s still under the radar of most women.

“It’s a complicated, long-term thing to work out, probably caused by a combination of factors – both biological and social,” she said.

She said, in the future, with an ageing population, women could start to have a similar overall rate of heart attacks to men.

And the authors said women with diabetes, high blood pressure and who smoke, “should be considered at a level of risk comparable to many men”.