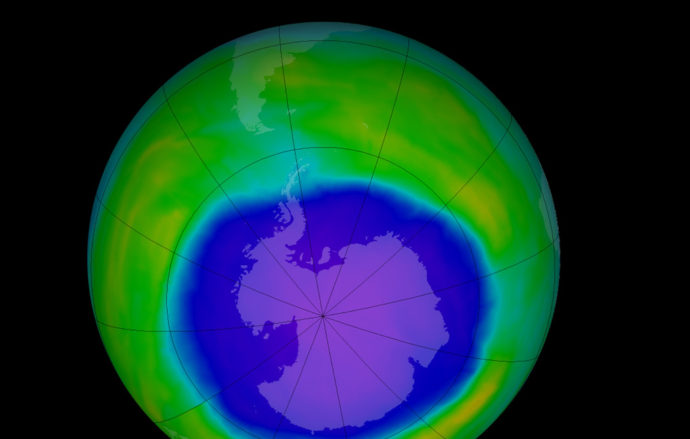 Ozone layer is healing, but maybe not the Arctic ozone hole, UN says

The ozone layer that shields life from cancer-causing solar rays is recovering at a rate of one to three per cent per decade, reversing years of dangerous depletion caused by the release of harmful chemicals, a UN study said on Monday.

The four-yearly review of the Montreal Protocol, a 1987 ban on man-made gases that damage the fragile high-altitude ozone layer, found long-term decreases in the atmospheric abundance of controlled ozone-depleting substances and the ongoing recovery of stratospheric ozone.

“The Antarctic ozone hole is recovering, while continuing to occur every year. As a result of the Montreal Protocol, much more severe ozone depletion in the polar regions has been avoided,” the report said.

“Evidence presented by the authors shows that the ozone layer in parts of the stratosphere has recovered at a rate of one to three per cent per decade since 2000,” UN Environment and the World Meteorological Organization said in a statement.

“At projected rates, Northern Hemisphere and mid-latitude ozone is scheduled to heal completely by the 2030s followed by the Southern Hemisphere in the 2050s and polar regions by 2060.”

The UN had already hailed the success of the Protocol, which banned or phased out ozone-depleting chemicals, including chlorofluorocarbons (CFCs) once widely used in refrigerators and spray cans, but the report said it was the first time that there were emerging indications that the Antarctic ozone hole had diminished in size and depth since 2000.

In the Arctic, annual variations were much larger, making it hard to confirm whether there had been a definite recovery in the layer since 2000.

However, while most of the banned gases have been phased out, the report found at least one violation of the protocol: an unexpected increase in production and emissions of CFC-11 from eastern Asia since 2012.

The report said the source country or countries had not yet been identified.

If CFC-11 emissions continued at the same rate, return of mid-latitude and polar ozone-depleting chemicals to their 1980 values would be delayed by about seven and 20 years, respectively, the report said.