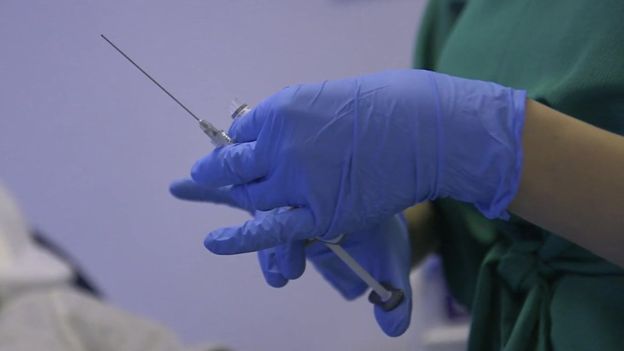 Penis fillers, designed to increase the organ’s girth, are gaining in popularity – despite warnings over complications. Two men tell the BBC why they are not ashamed to have them.

Abdul Hasan, 27, is a returning customer for penis fillers. This time he is having the procedure as a surprise present for his girlfriend.

He has been with her for eight years, but says it still plays on his mind whether he can please her sexually.

Last time he had a filler she was “100%” surprised, he tells the Victoria Derbyshire programme.

“It makes me happy for some reason,” he adds.

A penis filler is a liquid – usually hyaluronic acid – which is injected into the soft tissue under the skin of the shaft.

It is a non-surgical procedure and can be done in a matter of hours at a specialist clinic. It costs around £3,000 a time.

It is designed to increase a man’s flaccid girth, usually by one or two centimetres in circumference – depending on the amount injected – and lasts for around 18 months.

Mr Asif Muneer, from the British Association of Urological Surgeons, says he would “discourage” people from having them.

“All these augmentation procedures are mainly to increase your flaccid girth, and it will have no benefit on your erect length – so functionally it’s not going to improve matters.

“If anything, it might lead to complications that will impair their sexual function later on.”

For Abdul, low self-esteem was also a reason for wanting a 10ml filler.

He is within the NHS’s normal range for penis length and girth, but says he still feels “a bit ashamed” when other men walk around his local gym’s changing rooms with nothing on.

The first filler, he adds, made him feel much more comfortable – although he admits he had been “scared” of potential complications.

“I had it done, and my confidence built back up. You’ve got nothing to hide any more,” he says.

The delivery driver adds that within a couple of days he also felt better about himself in social situations.

“I was a changed person. If I saw a group of people I’d easily approach them.”

Two of the UK’s largest cosmetic surgery groups for male sexual health have told the Victoria Derbyshire programme they have seen a large increase in enquiries for penis fillers.

Moorgate Aesthetics and Androfill say they now have around 700 enquiries a month between them, compared to fewer than 10 a month, three years ago.

They also say they have seen a 20-fold increase in procedures, to more than 130 per month over the same period of time.

But while clinics like the one visited by Abdul use approved medical liquids, applied by trained doctors, experts are concerned about the rise of DIY fillers.

Mr Muneer says many men self-injecting their own fillers – using things like Vaseline, various oils and silicone – are not aware of the potential complications.

Many will go to NHS doctors a few days later, he explains, requiring treatment for an underlying infection.

“We then plan for surgery to either debride any dead tissue, or remove some of the filler.

“A lot of the time, we’re having to remove the whole penis shaft skin, and regraft it with skin from elsewhere in the body,” he says.

Heading into the clinic for his first treatment is Stuart Price from Caerphilly.

The 36-year-old thinks all men would get a bigger penis if they could.

Stuart recently lost eight stone (50kg) in weight and says this has caused changes to his body and excess skin.

“I don’t think I actually do need it done, but it would give me a bit more confidence,” he says.

“I’d just feel a bit better if mine was a bit bigger”.

Stuart was originally looking for a hair transplant when he saw the advert for penis fillers – and liked the idea of a non-surgical option.

The myth of the large penis

A 2015 study by King’s College London and the NHS looked at the penis length and girth of more than 15,000 men worldwide.

The average, professionally measured, turned out to be 5.1 inches (13 cm) when erect.

Only 5% were longer than 6.3 inches, while just 0.14% had what is known as a micro penis – defined as less than three inches when erect.

As for girth, the average flaccid penis was 3.6 inches (9 cm) in circumference, and 4.6 inches when erect.

Stuart has decided to opt for 15ml of hyaluronic acid – commonly used to flatten out wrinkles in people’s faces.

This is the maximum the clinic would inject.

Stuart’s girlfriend Carys admits she is “worried it will be too big” – although the fillers can be removed, at a cost, if the patient chooses.

The procedure continues, despite her reluctance, and around an hour later it is time to measure the difference.

Stuart’s girth – the circumference of the penis – when flaccid has risen from 12.5cm (five inches) to 15cm.

Doctors advise men to wait four weeks before it is safe to have sex again, to which Abdul is happy to adhere.

“You don’t really want complications with this sort of stuff,” he says, pausing. “Especially with your private parts.”