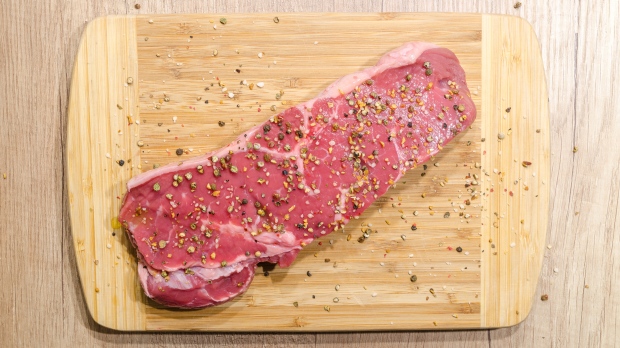 Canadians big fans of meat, but looking to curb consumption

More than one-sixth of Canadians have consciously cut back on the amount of meat in their diets, according to a new study – and that number is expected to grow significantly.

Researchers at Dalhousie University and the University of Guelph surveyed 1,027 Canadians on their meat-eating habits and their opinions about carnivorism. Preliminary findings from the survey were made public Tuesday.

The survey found that an estimated 6.4 million Canadians are at least partially restricting their meat intake. About 48.5 per cent of respondents reported eating meat every day, with another 40 per cent doing so once or twice a week.

Ontario residents were most likely to say they were already cutting some meat out of their diet, with 46 per cent saying so. In every other part of Canada, 15 per cent of respondents or fewer said they were reducing or eliminating their meat consumption.

More than half of respondents said they were interested in finding ways to reduce their meat consumption, with 32 per cent saying they would be willing to do so in the next six months.

Respondents were also asked about insects and lab-grown meat, two specific meat alternatives which researchers expect tosignificantly grow in popularity in the coming decades. Neither were seen as desirable alternatives, with 18 per cent of respondents saying lab-grown meat was a good alternative and 10 per cent saying the same for bugs and insects.

Researcher Simon Somogyi, an expert in agribusiness, said in a press release that demand for meat alternatives will likely ramp up by 2050, when the planet’s population is expected to pass 10 billion.

“While people will still be eating animal protein, plant-based proteins that are more sustainably produced are a creditable alternative,” he said.

In total, 62.4 per cent of respondents agreed with the statement “I am a big fan of meat in general,” while 60.9 per cent agreed with the idea that eating meat “is a fundamental right of every person.”

Previous research from Dalhousie has estimated that there are 2.3 million vegetarians and 850,000 vegans in Canada.

The online survey used for this research has an estimated margin of error of three per cent, 19 times out of 20.
Source: https://www.ctvnews.ca/lifestyle/canadians-big-fans-of-meat-but-looking-to-curb-consumption
Photo: Lukas / Pexels