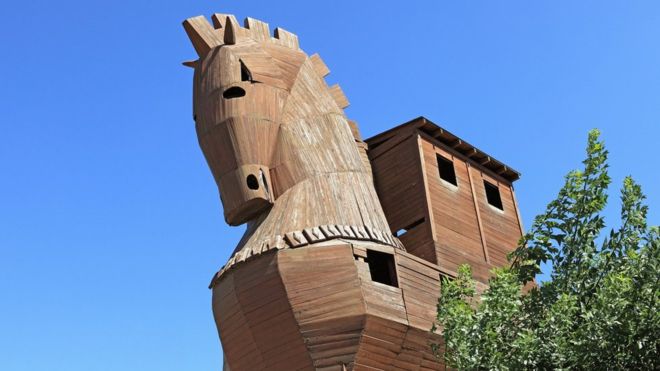 Scientists say they have engineered a new antibiotic that appears promising in early clinical trials.

The drug, made by Shionogi Inc, acts like the Trojan horse in Greek legend to trick bacteria into allowing it to enter.

Trials on 448 people with a kidney or urinary tract infection suggested the drug was as effective as current treatments.

Experts said the findings were an encouraging development.

The drug takes inspiration from the story of the giant wooden horse which was used to sneak Greek warriors into the city of Troy.

But instead of wood, iron is used to smuggle an antibiotic into bacteria.

Dr Simon Portsmouth, who led the international research, said: “During an acute infection, one of our innate immune responses is to create an iron-poor environment.

The new antibiotic, cefiderocol, binds to iron and, in a deadly mistake, bacteria transport it past their defences and inside their cells.

The trial results have been reported in the Lancet Infectious Diseases journal.

“Cefiderocol was found to be both safe and tolerable,” says Dr Portsmouth.

The study is a rare development in the field.

Bacteria becoming resistant to antibiotics is making some infections incredibly difficult to treat.

The Review on Antimicrobial Resistance made stark predictions for the future, including 10 million people dying every year from drug-resistant infections by 2050.

Yet new drugs are in scarce supply.

Prof Serge Mostowy, from the London School of Hygiene & Tropical Medicine, said: “This important study offers hope for a new antibiotic that could potentially be an alternative to treating them, but we are not there yet.”

Much larger trials are still needed to be sure of the effectiveness of the new antibiotic.

Experiments in people with pneumonia and those with infections that are resistant to some of our most powerful drugs, carbapenems, are already under way.

However, once cefiderocol is smuggled inside, it kills bacteria in the same way as current antibiotics.