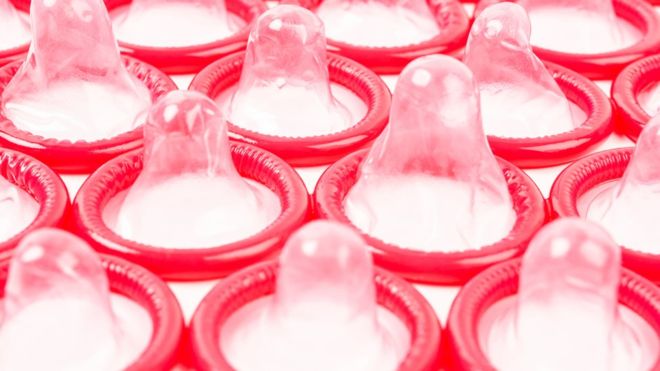 Scientists say they have found a way to make self-lubricating latex condoms that become slippery on contact.

It is thanks to a special, durable coating that should last throughout intercourse, says the team, backed by the Bill and Melinda Gates Foundation.

They hope it will make condoms more appealing to use and thereby prevent sexually transmitted infections (STIs) as well as unwanted pregnancies.

Without enough lubrication, sex can be painful and condoms may split or slip.

When used correctly, condoms are a highly effective contraceptive, but not everyone likes them.

They are often already lubricated to make them easier to use, but sometimes this might not be enough for comfort.

People can add lubricant, but this can be messy and may need several applications, interrupting sex.

Researchers say the self-lubricating condom, which becomes really slippery once it comes into contact with body fluid, should get round this.

It could withstand intercourse involving at least 1,000 thrusts without losing its slipperiness, the Royal Society Open Science journal reports.

According to the researchers, intercourse typically lasts half that time, but some sessions are longer.

When tested for comparison, regular condoms coated with a shop-bought, water-based liquid lubricant were more slippery initially, but became less so after around 600 thrusts.

A group of volunteers were also asked to touch and rate both condoms, in terms of slip and slide.

Most of the 33 men and women rated the self-lubricating one more highly.

Researcher Prof Mark Grinstaff, from Boston University, said: “It feels a bit slimy when you handle it dry, but in the presence of water or natural fluids it becomes really slick. You only need a little bit of fluid to activate it.”

The researchers say more tests are needed to compare how well the self-lubricating condom performs against other brands of condoms in real-life settings.

A spin-off company from the university is now planning to develop a product for the commercial market, subject to regulatory approval.

Dr Nicola Irwin, from Queen’s University, Belfast, is an expert in healthcare materials and technology. She said similar “hydrophilic” coatings have been used in urinary catheters to improve comfort.

“These coated catheters are, in general, associated with a greater degree of user acceptability than the alterative uncoated and gel-lubricated devices. This user preference is mainly due to the reduced levels of discomfort upon insertion, together with the ease of handling and convenience of ‘ready-to-use’ hydrophilic-coated catheters.

“It may be expected that the newly developed hydrophilic-coated condoms could afford similar benefits, but we need more trials.”

Meanwhile, researchers at the University of Wollongong, Australia, have been working on making a self-lubricating condom out of tough hydrogels rather than latex or rubber, that feel more like real skin.

Bekki Burbidge, from the sexual health charity FPA, said: “We welcome new innovations to encourage condom use. Condoms are the only method of contraception that also help to protect against STIs, so it’s important that people feel confident and comfortable using them.

“Lubrication can make sex more comfortable and enjoyable so we encourage people to try out different water-based lubricants as well as different sizes, shapes and textures of condoms to find out what suits them and enhances their sexual pleasure.”