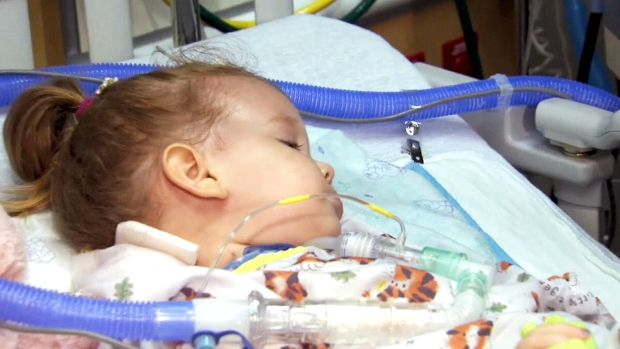 Cases of a rare polio-like condition have begun turning up in some Canadian children, following reports of dozens of cases in the U.S. in recent weeks.

Known as acute flaccid myelitis, the condition causes muscle weakness in one or more limbs, and typically occurs after some kind of viral infection.

Dr. Jeremy Friedman, pediatrician-in-chief at the Hospital for Sick Children, wouldn’t give an exact number, but said doctors at the Toronto hospital have seen less than 20 cases of limb-based paralysis since the beginning of September — with about a dozen of them confirmed as acute flaccid myelitis, or AFM.

That figure may seem small, but Friedman said Sick Kids normally sees only about two cases of AFM a year and the condition carries an annual incidence risk of about one case per million children.

“The way that it presents in children is with a pretty sudden weakness or paralysis of one or more of their limbs,” he said Monday. “So maybe an arm or maybe a leg or maybe an arm and a leg, and in this particular acute flaccid myelitis, it’s usually on one side.”

The trigger for the condition is unknown, but MRI imaging shows that those with AFM have an inflammatory abnormality in a region of the spinal cord called the anterior horn cell.

While it’s speculative, many doctors believe those who develop AFM may have an underlying genetic predisposition to the condition.

“Even with the spike of cases that we have at the moment, it’s still an incredibly rare condition,” Friedman said.

“When you think about how many kids will get a viral infection at this time of year, you’re literally talking about huge numbers. So a tiny, tiny percentage seem to go on to get AFM.

“So there does seem like there’s more to this than just the virus infection and there has to be some sort of genetic setup that makes these children vulnerable to that particular virus.”

Last week, the U.S. Centers for Disease Control reported a spike in AFM, with more than 60 cases confirmed in 22 U.S. states in the last several weeks. Since the beginning of the year, 127 cases of AFM were reported in the U.S., including one death. The average age of those affected is four.

Friedman said the Sick Kids cases are all among children under 15, with most clustered among kids of pre-school age. A couple of the children ended up being treated in the ICU, but there have been no deaths.

A spokesperson for the Public Health Agency of Canada said there have been 25 probable and five confirmed cases of sudden-onset muscle weakness in children reported in the country this year, but current surveillance data have not picked up any recent surge in cases.

Friedman said the risk of a child developing the condition “is still incredibly low.”

“But that said, because we are seeing quite a few more cases than we would normally see, we certainly want our colleagues … to be aware of what to look for,” he said of other practitioners and hospitals.

“The message I would send out is there’s no cause for alarm,” Friedman said, but if a child develops sudden limb weakness or is not moving an arm or a leg, parents should have them seen by their health-care provider as soon as possible.