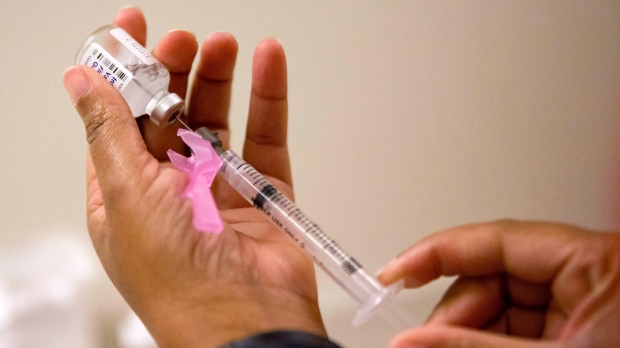 Pregnant women are less likely to be hospitalized for the flu if they have received the flu shot, a new study confirms.

The new findings, published Thursday in the journal Clinical Infectious Diseases, are the latest evidence in support of influenza vaccines, which for decades have faced unsubstantiated claims that they are unsafe.

Based on data collected from 2 million pregnant women between 2010 and 2016, researchers in Canada, the U.S., Australia and Israel found that the influenza vaccine reduced an expectant mother’s risk of flu-associated hospitalization by an average of 40 per cent.

“A lot of women are really scared to get anything during their pregnancy, so they’re afraid to get vaccines,” said co-author Jeffrey Kwong, a scientist with ICES and Public Health Ontario. “But women who are pregnant are more likely to be hospitalized if they get influenza.”

The study, co-authored by the U.S. Centers for Disease Control and Prevention, is the first to examine the effectiveness of the flu shot against laboratory-confirmed flu-related hospitalization during pregnancy. More than 80 per cent of the pregnancies analyzed fell within flu season, underscoring the risks that women face during pregnancy.

Flu illness is especially dangerous for pregnant women whose immune systems, hearts and lungs are undergoing changes, resulting in increased vulnerability to the flu.

“Expecting mothers face a number of threats to their health and the health of their baby during pregnancy, and getting the flu is one of them,” said study co-author Allison Naleway from the Kaiser Permanente Center for Health Research in Oregon, in a press release. “This study’s findings underscore the fact that there is a simple, yet impactful way to reduce the possibility of complications from flu during pregnancy: get a flu shot.”

The vaccine was no less effective whether the women had underlying medical issues such as asthma or diabetes, or whether they were in the first, second or third trimester of their pregnancy, the study showed.

“There’s a perception that they may not be safe. It’s important that we keep doing studies,” he said. “Every year the flu shot is a little bit different. That’s why there are studies continually confirming these are safe vaccines.”