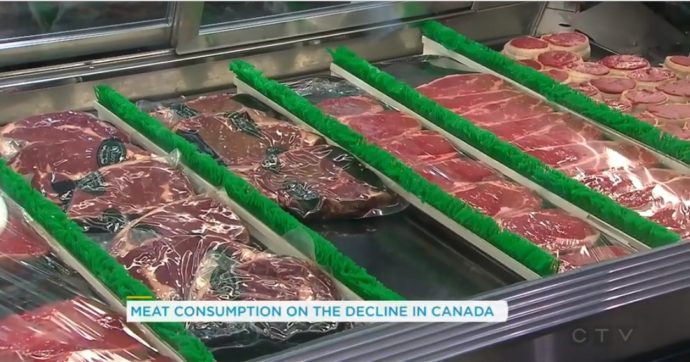 Vegetarians and vegans now account for nearly 10 per cent of Canada’s population, and their increased presence is forcing the restaurant and meat production industries to consider new approaches.

According to research from Dalhousie University, there are 2.3 million vegetarians in Canada, up from 900,000 15 years ago. Another 850,000 people consider themselves vegan. Those two numbers add up to 9.4 per cent of the Canadian population.

Sylvain Charlebois, a professor of food distribution and policy at Dalhousie, says the most “disturbing fact” for meatmakers is that the majority of Canadian vegetarians and vegans are under the age of 35. That, he says, means that the increases in vegetarians’ ranks will likely only ramp up as today’s vegetarians become a bigger part of society.

“Likely they’ll be raising children the way that they’re eating themselves,” he told CTV’s Your Morning.

Charlebois says there are several reasons more and more people are choosing to go meat-free, with one of the most common being animal welfare concerns. When people who have spent little time on farms themselves see footage of animal abuse, he says, it can influence their perceptions of meat-eating.

Other factors cited by Charlebois include the rising prices of beef and other meats, environmental concerns and personal health.

“I can’t remember the last time I read a study suggesting that we should eat more meat,” he said. “The scientific evidence seems to be pretty strong encouraging people to eat more vegetable proteins.”

Vegetable proteins, such as lentils and chick peas, are often eaten by people who have cut meat out of their diet and want to maintain a healthy level of protein consumption.

Meatless restaurants are increasingly dotting the Canadian culinary landscape in a bid to cater to vegans and people who are looking to make smaller cuts to their meat consumption.

Even larger chains that pride themselves on their meat are getting into the alternative protein game. Burger giant A&W recently introduced its “Beyond Meat Burger,” which includes a patty made from peas, rice and other plant-based ingredients.

While there can be personal benefits to giving up meat, Charlebois cautions that there are also drawbacks to the economy as people move toward vegetarianism and veganism – particularly given the country’s large agricultural sector. Canada’s poultry, egg and red meat industries produced $23.4 billion worth of goods in 2017, according to Agriculture and Agri-Food Canada.

Charlebois says his meetings with cattle farmers and other meat producers has left him with the impression that the industry sees vegetarianism as a fad or even an enemy, as opposed to a new reality of Canadian eating habits.

“I’m not entirely sure the industry appreciates what’s happening,” he said.

Instead of questioning the health benefits of vegetable proteins, Charlebois says, meat producers should “befriend the enemy” – similar to how major automakers have started manufacturing electric vehicles instead of fighting their rise.

To do that, Charlebois suggests meat producers start promoting the benefits of mixing their products with other protein sources like chick peas and lentils.

“You basically offer Canadians a healthy solution, and it will cost less to them,” he said.

Geographically, the Dalhousie study found that British Columbia and Ontario contained Canada’s highest proportions of vegetarians and vegans, with those diets being less common in the Prairies and Atlantic Canada.
Source: https://www.ctvnews.ca/canada/more-than-3-million-canadians-vegetarian-or-vegan-study-1.4027606