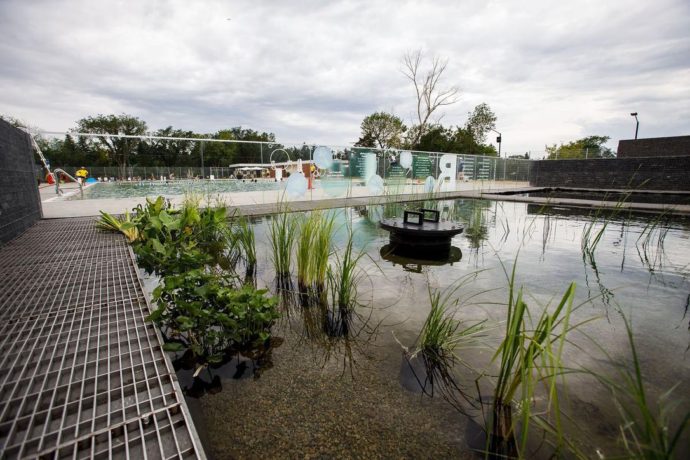 Green is clean, local swimmers learned Wednesday, as the City of Edmonton celebrated the launch of Canada’s first natural public pool. By noon, the Borden Natural Swimming Pool had about 100 people lined up outside, toting towels, trunks, and pool toys, waiting to get in.

Attendees were dressed in everything from wetsuits to swimsuits to business suits, as curious residents from all over the city dropped in to test the waters and inspect the filtration system.

Inside, music blasted around refreshment stands and bouquets of blue and green balloons and wind spinners, while children tossed beach balls, adults spiked volleyballs, and swimmers paddled around the pool, surrounded by sunbathers stretched out on the deck.

Tied up in city council, Mayor Don Iveson couldn’t make it for the ribbon-cutting. But even if he did, he would have had a hard time finding a seat — every patio and pool chair was occupied or had a towel draped over it.

Amy Lelonde and Amelia Reyes were among the first to dive in to the pale green water. Splashing by the edge, the pair said they travelled 40 minutes by bus from Clareview in east Edmonton to take the plunge.

Used to chlorinated and salt water swims at city rec centres, they were pleasantly surprised by the pool’s perks.

“I could spend the whole day here,” Reyes, 15, added. “I like the volleyball and the sand. It looks like a real beach.”

In the public interest, StarMetro Edmonton suited up, showered down, and cannonballed into the deep end to find the water comfortably cool and clean, but a little gritty with sand tracked in from the beach.

While the pool rules didn’t bother Lelonde (swimmers are asked to avoid cotton swimwear and sunscreen with phosphates), she admitted she was hesitant to dip her toe in at first, not entirely sure how the water purification process worked.

“What if someone pees in it or something?” she asked. “I don’t like that.”

Cyndi Schlosser, the pool’s facility manager, said that just because the water isn’t the “pristine blue” people are used to seeing at other facilities, doesn’t mean it isn’t clean.

“It’s more like swimming in a lake — a very, very clean lake,” Schlosser said. “We have interpretive signage, and you can also see portions of the filtration system, so people get to learn not only what they’re swimming in, but also a little bit about the environment that they’re a part of.”

Over the course of the afternoon, several swimmers climbed a stepladder to look down on the Neptune Filter, a wall of layered granite that sifts out leaves and other large solids, while others looked at the hydrobotanical beds, simulated wetland pools full of flora, algae, and zooplankton that remove phosphates, nitrogen, and other contaminants from the water.

The stepladder and the refreshment tents were only there for the day, Schlosser said. “Otherwise, the shade structures, the beach volleyball, the lawn chairs, the loungers — those are all here to stay, along with the assortment of toys.”

Although Lelonde never got around to learning about the filtration system before jumping in, she said she had no regrets about beating the heat at the new pool and plans to visit again.

“I gotta enjoy the day,” she said, “and live life in the moment.”