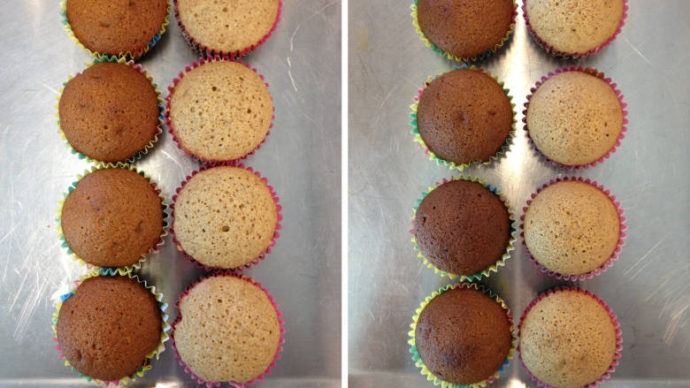 New Canadian research points to possible good news if you love dessert and are counting calories or are concerned about blood-sugar levels.

The research, from the University of British Columbia (UBC), suggests calories from sugar can be lost during the baking process, so what’s shown on a food label may not reflect calories consumed.

The results of the study, which was funded by a Canadian government grant through NSERC, were recently published in the Journal of Nutrition & Food Sciences.

UBC food scientists measured the calories from sugar content before and after the browning process. They made two kinds of cake dough: one using invert sugar (a mixture of fructose and glucose) and another using sucrose (table sugar), and then compared the amount of sugar retained in each cake after baking.

The samples were then freeze-dried, ground into powder and put through a laboratory process using enzymes to mimic human digestion.

By comparing the sugar content before and after the baking process, the researchers found on average up to 20 per cent sugar loss in cakes made with invert sugar, according to the study’s lead author, Ningjian Liang, a food science PhD student at the time of the research.

“In cakes that were made from sucrose, which is table sugar, we observed around five to eight per cent of sugar loss,” she said.

In cake with invert sugar, researchers found the digestible or available calorie content decreased by 36 per cent, while in cake with sucrose, it declined by about 12 per cent.

He said the browning reactions convert the sugar into compounds that aren’t digestible or absorbed. These non-digestible products may be used by the microbiome or excreted, he said.

Kitts said all sort of studies have looked at the chemistry and biochemistry of non-enzymatic browning, but few have related it to this issue of calories.

“We just want people to be aware of the fact that calories can be lost during processing and that’s not necessarily identified on the food label because the food label is what’s in the formulation.”

“There is the concern of sugar intake in the diet, and we know that baked goods have perhaps been a concern in the most recent past around fats, but also now with the renewed food labelling concerns around sugars. It’s certainly timely,” said Yuan, an associate professor who teaches food chemistry at Ryerson University.
Photo credit: Ningjian Liang/UBC
Original article at: http://www.cbc.ca/news/health/second-opinion-baking-calories-1.4690996