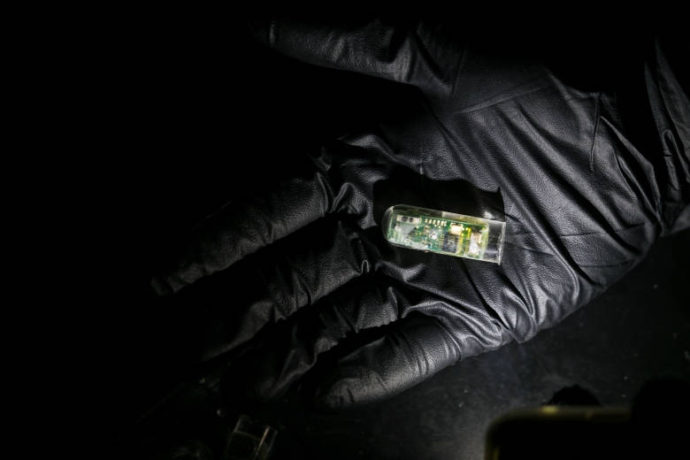 Have a stomach ache? Swallow a sensor

Diagnosing the cause of stomach pain could soon be as simple as swallowing two small pills that work together to report back about what is happening in your body. This technology uses biosensors, an analytical device that converts a biological response into an electrical signal. The biosensors harness the abilities of bacteria—and their incredible ability to act as little switches in response to environmental conditions—while a tiny sensor monitors their response.

Scientists at the Massachusetts Institute of Technology published their new work today in the journal Science. Their innovative approach is meant to replace the invasive endoscope that doctors presently use to push a camera down into your gut to aid with diagnosis. The new method already has a working app and has received significant consultation by gastroenterologists to ensure it’s safe and, most of all, useful for the medical field.

Bacteria routinely respond to environmental conditions and change their gene expression in response to the presence of different sugars. Researchers designed a bacterium using genetic engineering to act like a living light switch and a small sensor that responds to the bacteria and transmits a signal to a smartphone.

In this prototype, scientists were testing for the presence of a blood protein called heme—a molecule not typically found in the GI tract except if there is a bleed in the gut. This would otherwise be difficult to diagnose, but is an important symptom to track.

“So when a cell would encounter a heme in the environment, they would produce light as the output,” said Mark Mimee, lead researcher at MIT. “And by doing that we took natural sensing systems from other strains of bacteria and combined all of these parts into a probiotic strain of E. coli.”

While E. coli is a natural bacterium found in your gut, this strain has been engineered to produce light in response to the presence of heme.

The second pill then detects the tiny light signals emitted by the bacteria when they encounter the blood protein in the GI tract.

“A major challenge for sensing in the GI tracts is just the space available for a device is very limited. It’s really not possible—or it’s very difficult—to have wires to supply power to such a device and to collect the data from it,” said Phillip Nadeau, the research scientist responsible for the technology used in this study. “We succeeded in demonstrating that this very weak bioluminescence from cells could be detected within a small capsule size device, which was fully wireless.”

More work required to make it palatable for human consumption

The scientists have filed for a patent on the technology and hope to implement it into human use soon. It has already been tested in both mice and pigs to be sure that it was sensitive and accurate enough to detect a GI bleed in an animal. However, one hurdle is to try to shrink the sensor so that it’s a bit more palatable. The capsule is still a little large, measuring about 30mm by 10mm.

They also want to deal with any containment issues. That includes a kill switch, where the bacteria are engineered not to survive outside of the body and therefore cannot be transmitted.