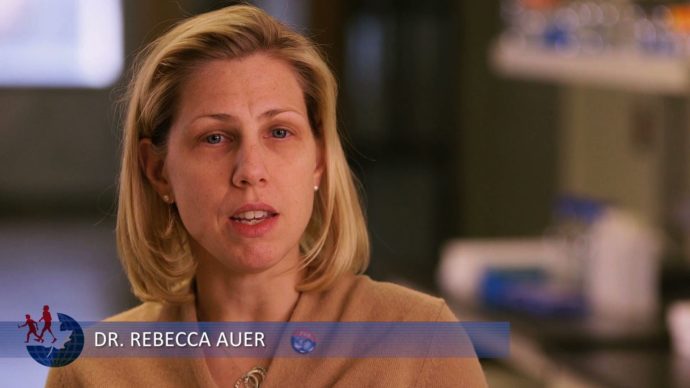 Pairing high doses of erectile dysfunction medication with the flu shot might sound like a potent cocktail for a wild winter weekend, but one Canadian researcher believes this seemingly unlikely combination may be a way to help the immune system naturally fight cancer after surgery.

“Every week, I take patients to the operating room and remove their tumours — and I know that in some of those patients, the cancer is going to come back,” Dr. Rebecca Auer, a surgical oncologist and head of cancer research at The Ottawa Hospital Research Institute, told CTV News. “So if there is a therapy that we had that would allow us to reduce the chance of that happening after surgery and improve cancer outcomes for my patients, I think that would be very exciting.”

With some forms of cancer, recurrence rates can be as high as 90 per cent after a tumour is surgically removed. One of Auer’s patients, for example, saw the disease return twice after first having surgery for colon cancer in 2005.

“The last one was very bad,” Bill Simpson told CTV News. “(I’ve) lost all of my bowel and my bladder.”

Currently, chemotherapy is the primary tool doctors use to kill lingering cancer cells following surgery. But as anyone who has undergone such adjuvant treatment knows, it can ravage one’s natural defences.

“Instead of using toxic drugs that might suppress the immune system, we’re actually trying to use drugs that will boost the immune system so that the patient’s own immune cells can attack the tumours and hopefully eradicate them,” Auer said of her goal.

In a previous study that looked at colon cancer patients, Auer showed that the stress of surgery leads to the blocking of the body’s natural killer (NK) cells (immune cells that play a major role in fighting cancer in our bodies), thus increasing the risk that cancer cells will migrate elsewhere in the body after surgery to form new tumours in a process called metastasis. Those NK cells, the study found, were reduced by an alarming 85 per cent following cancer operations.

Hoping to strengthen cancer patients’ natural immune systems before surgery, Auer and her team believe they have struck on a novel solution: pairing the erectile dysfunction medication tadalafil, which is marketed under the brand name Cialis, with the common flu vaccine.

In a March paper, Auer and her team outlined how the process worked in experiments with mice. Erectile dysfunction medication, they found, blocked a type of cell that is responsible for inhibiting NK cells after cancer surgery. The flu vaccine then further stimulated cancer-killing NK cells. This incredibly simple therapy was found to cut the number of spreading cancer cells by more 90 per cent in lab mice.

“(It was) almost like the animal didn’t have surgery at all,” Auer explained. “It was something that we predicted, but of course seeing it for the first time was really exciting for all the researchers in the lab.”

In a world first, Auer and her team are now conducting potentially groundbreaking clinical trials of the novel treatment with 24 patients undergoing abdominal cancer surgery at The Ottawa Hospital.

One of those patients is Jackie Fletcher. The 57-year-old was diagnosed with liposarcoma in January — the same type of cancer that claimed the life of former Toronto mayor Rob Ford.

“With the liposarcoma, it does have quite a high chance of coming back,” Fletcher told CTV News. “I was more than eager to participate in trials.”

Several days before and after undergoing surgery in February to remove a large abdominal tumour, Fletcher received daily double doses of Cialis. Right before the surgery itself, she was then given a flu shot. Auer’s research team is now monitoring Fletcher’s NK cell levels.

“I’m hoping the cancer is gone and that it won’t come back,” the patient said.

Cialis appears to have no unintended side effects for women, Auer added, and it does not affect their sexual functioning. Men, however, risk enduring days of unintended erections while they take the erectile dysfunction medication.

In addition to seeing promising results so far, the price of the treatment is also a major plus, Auer added, with a flu shot costing roughly $10 and a single dose of Cialis costing about $10 a day. But although both drugs are widely available, Auer is warning people with cancer not to self-medicate until her current study is complete. She anticipates having results in about six months’ time.

“I’m very excited to see the results of the clinical trial,” she said. “I really hope this is a therapy that we could offer to our patients in the future… so that every patient will go to the operating room with something to boost their immune system so that their immune system can fight their cancer right after the surgery.”
Original article at: https://www.ctvnews.ca/health/erectile-dysfunction-drugs-and-flu-vaccine-may-help-fight-cancer-after-surgery-study-1.3939431