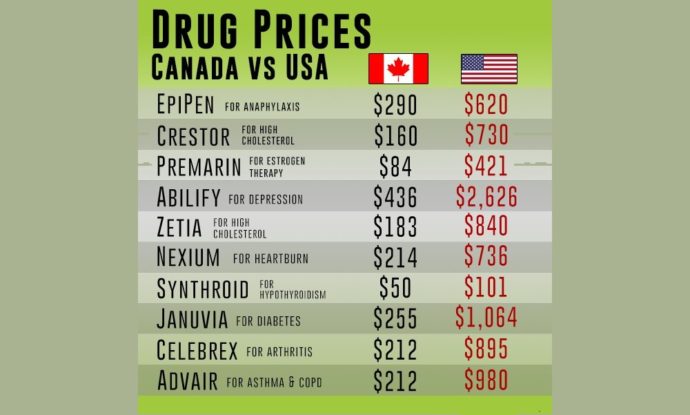 Lawmakers in more than two-thirds of the states are considering ways to reduce prescription drug costs, including importing them from Canada, as they strive to balance budgets without knowing for sure what their government’s share of the tab will be.

A total of 87 bills in 34 states of all political stripes seek to save money on prescription drugs, according to the nonpartisan National Academy for State Health Policy. Six of those states are considering bills that would allow drugs to be imported from Canada, where they cost an average 30 per cent less than in the United States.

One is liberal Vermont, where lawmakers have revived a nearly 2-decade old proposal. Conservative Utah is considering a similar proposal. Maryland is looking at creating a commission that would regulate drug costs.

“States have to balance budgets,” said Trish Riley, executive director of the health policy academy, based in Portland, Maine. “You budget a certain amount of money for drugs in a state employee health program or a Medicaid program, and you’re surprised by the mid-year increases that are unpredictable and huge.”

The stakes are high not only for state governments, government employees and Medicaid recipients, but also for anyone else paying for prescription drugs. The federal government does not control drug prices, which are set by drug companies and are subject to costs and competition, while Medicaid negotiates cheaper drugs for low-income Americans.

But one hope is that importing drugs can put downward pressure on domestic costs for all, said Utah state Rep. Norm Thurston, a Republican who introduced a drug-import bill in his state.

“It’s not a liberal-conservative thing,” he said. “It’s not a Democrat-Republican thing.” Of the pharmaceutical industry, he said, “it makes them compete against themselves.”
Original article at: https://globalnews.ca/news/4019298/u-s-states-importing-prescription-drugs-from-canada/