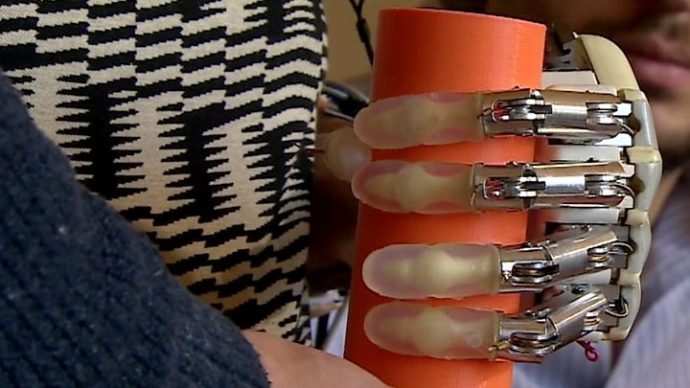 Scientists in Rome have unveiled the first bionic hand with a sense of touch that can be worn outside a laboratory.

The recipient, Almerina Mascarello, who lost her left hand in an accident nearly a quarter of a century ago, said “it’s almost like it’s back again”.

But the sensory and computer equipment it was linked to was too large to leave the laboratory.

Now the technology is small enough to fit in a rucksack, making it portable.

The prosthetic hand has sensors that detect information about whether an object is soft or hard.

These messages are linked to a computer in a rucksack that converts these signals into a language the brain will understand.

The information is relayed to Almerina’s brain via tiny electrodes implanted in nerves in the upper arm.

In tests Almerina – who was blindfolded – was able to tell whether the object she was picking up was hard or soft.

She told me: “The feeling is spontaneous as if it were your real hand; you’re finally able to do things that before were difficult, like getting dressed, putting on shoes – all mundane but important things – you feel complete.”

This represents another advance in neuroprosthetics, the interface between machine and the human body.

Professor Silvestro Micera, a neuroengineer at EPFL in Lausanne and Sant’Anna School of Advanced Studies in Pisa told me: “We are going more and more in the direction of science fiction movies like Luke Skywalker’s bionic hand in Star Wars – a fully controlled, fully natural, sensorised prosthesis, identical to the human hand.”

A robotic prosthesis better than the human hand is still a long way off, but the team believe it might eventually be a reality.

Prof Paolo Rossini, a neurologist at University Hospital Agostino Gemelli, Rome said: “Once you can control a robotic prosthesis with your brain you can think about creating one that allows more complex movements than a hand with five fingers.”

The researchers paid tribute to Almerina and the other amputees who joined the project.

Almerina was able to keep the bionic hand for six months, but it has now been removed, as it is still a prototype.

The scientific team say they hope to miniaturise the technology even further so that a sensory bionic hand can be commercialised.

Almerina told me that when the bionic hand is perfected, she would like it back for good.
By Fergus WalshMedical correspondent
Original article at: http://www.bbc.com/news/health-42430895