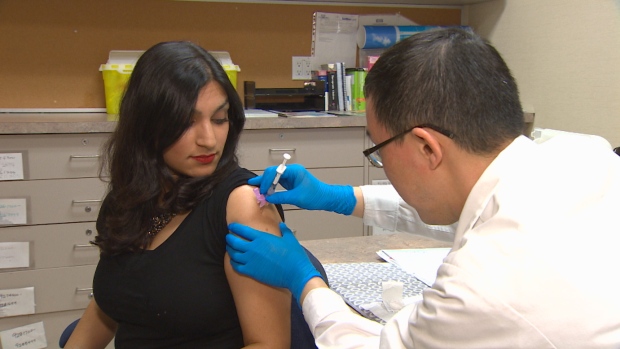 Flu vaccine may have low effectiveness against dominant strain

Canada’s chief public health officer says it’s possible that this year’s flu vaccine may have limited effectiveness against a particularly severe strain of influenza A that appears to be dominant throughout Canada.

“In Canada it’s still too early to actually tell how effective this vaccine will be,” Dr. Theresa Tam told CBC News. “There is a potential … of low vaccine effectiveness, but we really can’t tell at this point in time.”

The reason for believing there’s a potential weakness in the vaccine, Tam said, is the fact that countries in the Southern Hemisphere, which have their flu season before Northern Hemisphere countries, experienced “poor vaccine effectiveness” against H3N2, a subtype of influenza A that tends to cause more severe illness among vulnerable people, including the elderly and children.

In addition, studies suggest that the process of manufacturing the vaccine may have compromised its effectiveness against H3N2 because it can mutate when grown in eggs — and Canada uses egg-based vaccines, Tam said.

Vaccine manufacturers, the World Health Organization and others are studying the situation to determine if that was the case, she said.

Doing so is “very important,” Tam said, “as we move ahead to future years of vaccine program planning and recommendations.”

Influenza B appearing early
The potential for lower vaccine effectiveness makes it even more important that Canadians take “other measures” to protect themselves against the flu, she said, including handwashing, coughing into your sleeve, disposing of used tissues, and staying home when you’re sick.

Tam said there are also anti-viral medications, such as Tamiflu and zanamivir, to treat flu and help prevent outbreaks in long-term care homes and other facilities.

But people should still get the flu shot, she said, because it offers protection against multiple strains.

“Given the mix of influenza viruses circulating right now and more could still circulate later on in the ensuing months, we still recommend influenza vaccine for Canadians over six months of age,” she said.

One type of flu that’s circulating earlier than usual this year is influenza B, according to data released by the Public Health Agency of Canada (PHAC) in its latest FluWatch report on Friday.

“What’s important about influenza B is actually its impact on kids,” Tam said.

Although children are more susceptible to serious illness from H3N2 than the general population, they are also particularly vulnerable to the “B” strain, possibly because of their lack of previous exposure, she said.

Tam said that given the burden of influenza B on kids, the national advisory committee on immunization recommends children receive the “quadrivalent” vaccine, which protects against four strains of flu, including two B strains. The quadrivalent vaccine available in Canada right now covers the B strain that is currently circulating, she said. The other type of vaccine — called “trivalent” because it covers three strains of flu — “unfortunately” doesn’t cover that B strain.

Parents can ask their local public health agencies which vaccine is available in their area, she said.

Flu ‘in full swing’
The latest FluWatch report also says the number of flu cases overall continued to rise across the country in December, but “are within the range of expected levels for this time of year.”

The type of flu detected is mostly H3N2, although influenza B detections continue to increase.