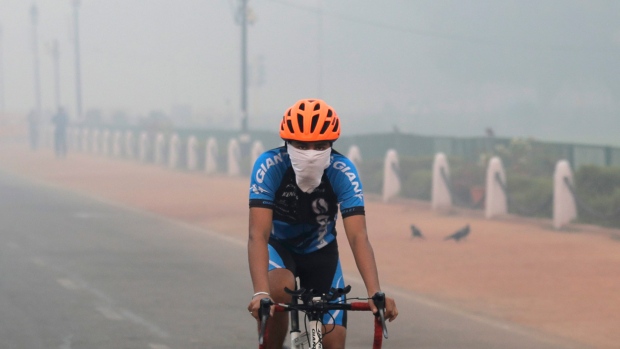 Pollution linked to one in six deaths

Pollution has been linked to nine million deaths worldwide in 2015, a report in The Lancet has found.

Almost all of these deaths occurred in low- and middle-income countries, where pollution could account for up to a quarter of deaths. Bangladesh and Somalia were the worst affected.

Air pollution had the biggest impact, accounting for two-thirds of deaths from pollution.

Brunei and Sweden had the lowest numbers of pollution-related deaths.

Most of these deaths were caused by non-infectious diseases linked to pollution, such as heart disease, stroke and lung cancer. 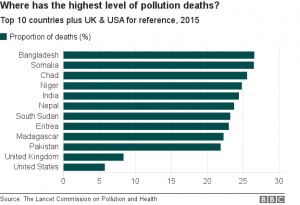 “Pollution is much more than an environmental challenge – it is a profound and pervasive threat that affects many aspects of human health and wellbeing,” said the study’s author, Prof Philip Landrigan, of the Icahn School of Medicine, at Mount Sinai in New York.

The biggest risk factor, air pollution, contributed to 6.5 million premature deaths. This included pollution from outdoor sources, such as gases and particulate matter in the air, and in households, from burning wood or charcoal indoors.

The next largest risk factor, water pollution, accounted for 1.8 million deaths, while pollution in the workplace was linked to 800,000 deaths globally.

About 92% of these deaths occurred in poorer countries, with the greatest impact felt in places undergoing rapid economic development such as India, which had the fifth highest level of pollution deaths, and China, which had the 16th.

The authors said air pollution affected the poor disproportionately, including those in poor countries as well as poor people in wealthy countries.

“Pollution threatens fundamental human rights, such as the right to life, health, wellbeing, safe work, as well as protections of children and the most vulnerable.”

The results were the product of a two-year project. The authors have published an interactive map illustrating their data.
Photo: screenshot from the CTV News website.
Original article at: http://www.bbc.com/news/health-41678533